See video footage of the wreathlaying ceremony here, courtesy of the US Embassy

Read about other JFK Commemorative events in Ireland here

The Tánaiste recently took part in the US Embassy ceremony to mark the anniversary of President Kennedy’s death. This followed a number of events marking the 50th Anniversary of the President’s visit to Ireland, including a commemorative lecture in Iveagh House in June 2013.

Ireland cherishes the memory of President Kennedy’s visit to this country in 1963 for the manner in which it reflected on the positive contribution of Irish-America to the United States and for the important impact on US-Ireland relations since then.

The President’s death in November 1963 was particularly sad for Irish people, given the affection with which he was held here.

2013 saw a number of commemorations to mark these events, both in Wexford, from where the President’s ancestors emigrated to the US, and throughout the country. 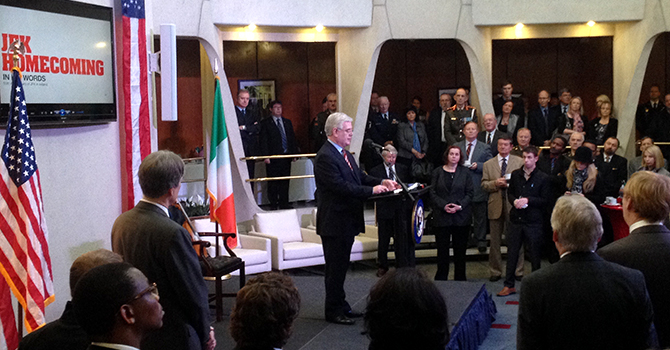 On Wednesday 19 June:  a lecture, entitled “The Kennedy Lecture: Reflections on Ireland and America”, was delivered by the Governor of Maryland, Martin O’Malley, to an invited audience as part of the Iveagh House Commemorative Lecture Series.  The lecture was preceded by a panel discussion, moderated by broadcaster Ryan Tubridy, with Loretta Brennan Glucksman, Chair of the American Ireland Funds, and Professor Joe Lee, to examine the impact on Irish America of Kennedy’s election as President as well as the impact of his visit to Ireland at the outset of a decade of great change for the country.

A video package of this commemorative lecture is available to view here:

The lecture kicked off a week-long series of commemorative events in Ireland, which included the opening of a new visitor centre at the Kennedy homestead in Wexford, the re-dedication of the JFK park and arboretum and the lighting of the emigrant flame at New Ross quayside.

The fiftieth anniversary of the President’s death in November, was marked by the Tánaiste at the US Embassy, where, together with US Chargé d’Affaires, Stuart Dwyer, he laid a memorial wreath. The ceremony was conducted in the presence of members of the 36th and 37th Cadet Classes of the Defence Forces, who, respectively, provided the honour guards for President Kennedy’s visit to Ireland, and, at the request of First Lady Jacqueline Kennedy, at his graveside in Arlington National Ceremony in 1963.

In his remarks, the Tánaiste recalled November 22 1963 as a dark day etched in the memory of a generation of Irish people.  He described the President’s visit to Ireland as ‘a milestone in Ireland’s journey from independence to becoming the modern and self-confident nation that we are today’. 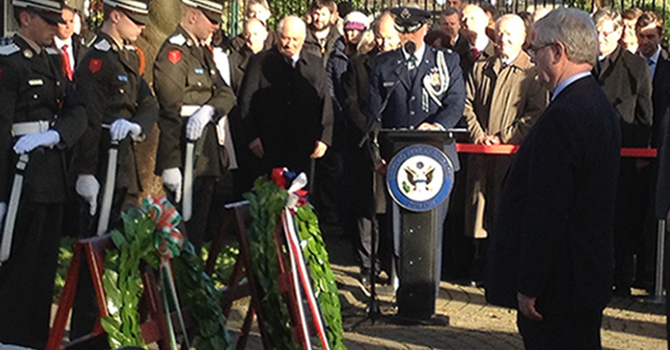 See video footage of the wreathlaying ceremony here, courtesy of the US Embassy

Read about other JFK Commemorative events in Ireland here