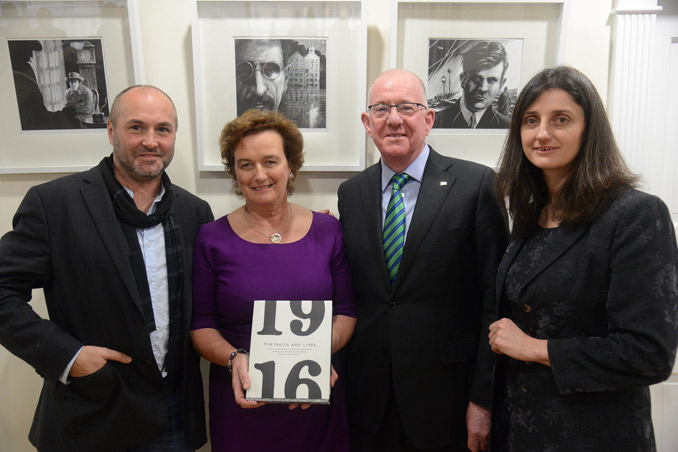 The Minister for Foreign Affairs and Trade, Charlie Flanagan TD, is in New York to launch the Ireland 2016 Commemorative Programme of events in the United States to mark the centenary of the 1916 Easter Rising.

Part of the Ireland 2016 Global & Diaspora Programme, the US Programme is organised and supported by the Embassy of Ireland in Washington, Culture Ireland and the Irish Consulates General in New York, Boston, Chicago, Austin, Atlanta and San Francisco, together with many partner organisations.

During 2016 an exciting programme of political, economic and cultural events will take place across the United States.

Hundreds of cultural, community and academic events will take place next year in the US to commemorate the Easter Rising of 1916

Speaking ahead of his visit, Minister Flanagan said:

“America is the only foreign country specifically referenced in the 1916 Proclamation and, as such, merits special attention in this important centenary year.”

“The United States is home to the greatest concentration of our Diaspora and the ties are of extraordinary depth and breadth. I know the USA 2016 Programme is going to resonate with Ireland’s diaspora and friends right across the United States.”

Hundreds of cultural, community and academic events will take place next year in the US to commemorate 1916. The centrepiece will be a three week Irish Arts Festival taking place at the Kennedy Centre in Washington DC from 16 May to 5 June which will celebrate a century of Irish arts and culture.

Other events taking place across the US include:

The Ireland 2016 Programme is an invitation to all of Ireland’s citizens, diaspora and friends to join together to remember 1916

Minister Flanagan will also launch the Greater New York Region 2016 Commemorative Programme while in New York. The Programme features over 70 educational, historical, cultural and commemorative events. The launch will take place in Pier A, Battery Park – the only remaining historic pier in the city of New York and a Manhattan landmark which looks towards Ellis Island where millions of Irish emigrants first stepped onto the shores of the United States of America.

While in New York, Minister Flanagan will brief Irish American community leaders on recent developments in Northern Ireland, including the Fresh Start Agreement. The Minister will also meet with the Digital Irish organisation to discuss its innovative approach to tech investment. Digital Irish have assisted 75 Irish startups to move into the US market since their establishment in 2013.

Learn more about the Ireland 2016: Global and Diaspora Programme on www.ireland.ie or www.dfa.ie

Further details on the US programme.