The Department of Foreign Affairs and Trade was back in Screggan, Tullamore this year for the 2017 National Ploughing Championships. Visitors to our stand had the chance to travel around the world with us, learning about the countries where we work and how to travel safely and securely. Every person entering the tent was handed their very own ‘Ploughing Passport’, allowing them to visit stands representing some of the work we carry out on behalf of the Irish people.

Before embarking on their journey around the tent, travellers were invited to check-in with the passport office to see some of the features of the new passport booklet and admire the handy new passport card. As we all know, “expired passports just won’t fly” and visitors to the tent were encouraged to check their passport expiry date and were shown the easy new system to renew passports online. 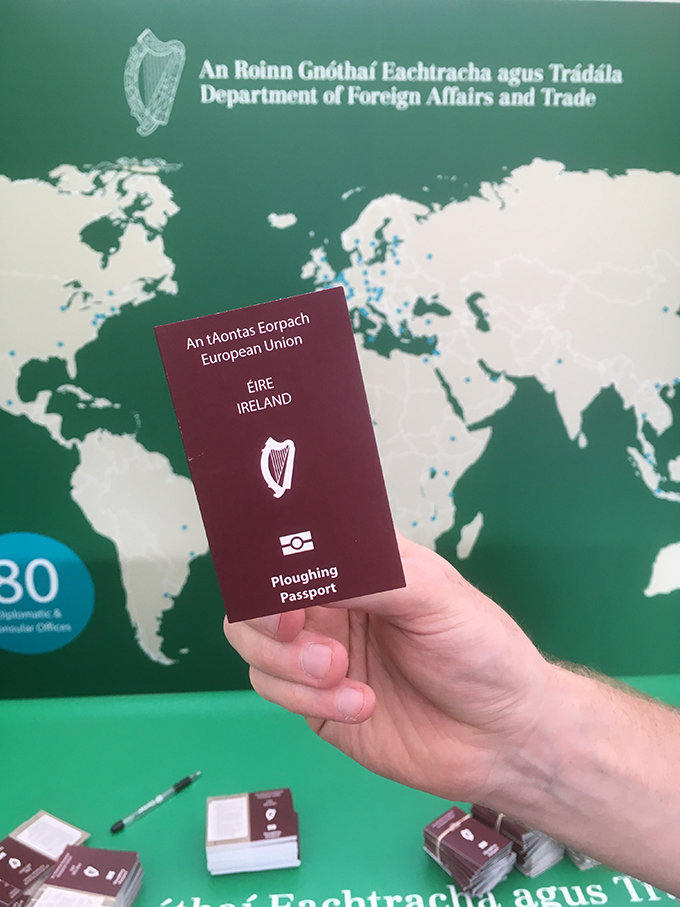 In our consular section, the advantages of the user-friendly Travelwise app were demonstrated to all our intrepid travellers. The app contains travel advice and consular advice for Irish citizens abroad and covers 200 countries, all of which is accessible directly from your phone.

Armed with their ploughing passports, visitors to the tent were then invited to travel to Mexico to learn more about the connections between Ireland and Mexico. Over 70% of our trade with Latin America is with Mexico, with Ireland exporting €1.7bn worth of goods to Mexico in 2016. There are also some important historical connections - the real life inspiration behind the legend of Zorro is said to be an Irishman named William Lamport, whose statue lies in the Monument to Independence (Ángel de Independencia) in Mexico City? [Link: find out more about our links with Latin America here]

Our visitors then travelled to Brussels, to learn about the Irish men and women who make important contributions to European Union policy on a daily basis. Our information stand on the European Union encouraged Irish citizens to explore job opportunities in the European institutions. The EU Jobs campaign is encouraging more Irish citizens to work in the European institutions so that Irish perspectives are brought to European-wide discussions and decisions, and Irish people and their priorities are represented at every level in Europe.

From Brussels to Tokyo, crowds at the ploughing set off to learn about Ireland’s close relationship with Japan. Tokyo hosts the oldest and largest St. Patrick’s Day parade in Asia and over 20,000 Japanese visitors make the long journey to Ireland every year. In 2015, trade between the two countries was worth a staggering €9.8bn!

When travelling around the globe, it is always hard not to bump into an Irish person, especially when you find yourself on the other side of the world. Our Global Irish stand outlined the various supports Ireland offers its 3.6 million citizens living abroad, from the Emigrant Support Programme to the Global Irish Network. In partnership with the GAA, the Department also funds the Global Games Development Fund to support projects around the world – there are now more than 400 GAA clubs outside of Ireland! 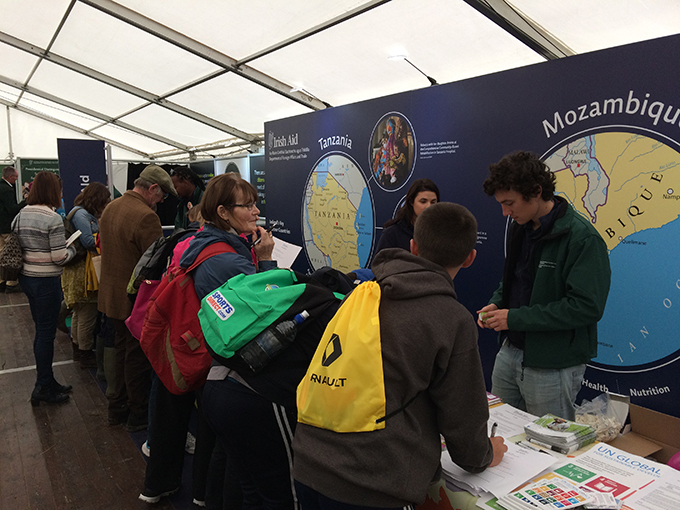 The tour of the world ended with trips to three of our key partner countries: Tanzania, Mozambique and Vietnam. A quiz tested the knowledge of our well-travelled explorers – examples of the questions include ‘what is Irish Aid?’ and ‘can you name one of Irish Aid’s priorities in Tanzania?’ Having travelled across four continents, it was the right time for ploughing globetrotters to reflect on the UN Global Goals for Sustainable Development, signed by 193 countries following negotiations led by Ireland and Kenya. For young and old, Irish Aid also organised colouring and drumming sessions. This brought some extra energy and rhythm to our global tent and was the perfect send-off for those who had travelled with us around the world in 80 missions.