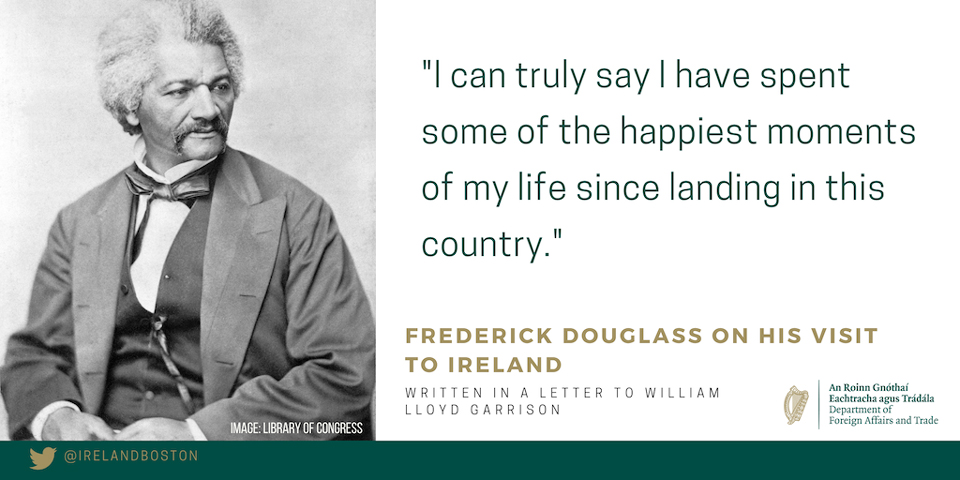 Please join us at the Consulate from 5.30 to 7.30pm on Wednesday 14th November for a "fireside chat" with Dr. William H. Smith, Founding Executive Director of the National Center for Race Amity and Irish author Don Mullan, of Hope Initiatives International.

Smith and Mullan recently returned from Ireland where they completed a four province screening of Smith's documentary film ‘An American Story: Race Amity and the Other Tradition’, about “The Other Tradition” in American race relations - the tradition of amity and close cross/racial collaboration to advance equity and social justice. The film focuses on the relations between pivotal figures of different races who worked together to advance equality, including the meeting in Dublin in 1845 of Frederick Douglass and Ireland’s Daniel O’Connell, the Liberator.

The fireside chat will discuss the visit of Frederick Douglass to Ireland, his encounter with Daniel O’Connell – including an inspirational speech by O'Connell which Douglass transcribed and sent back to the Abolitionist Movement in the USA, and the view that having come to Ireland as a single issue campaigner (to help end American slavery), Douglass left Ireland as an internationalist.

Smith and Mullan will be reflecting on their experiences in Ireland, their vision for a Frederick Douglass and Daniel O'Connell “Season”, and their views on the issues facing the U.S. and Ireland in the area of race amity.

If you are interested in attending, please register through Eventbrite here:

In partnership with the Edward M. Kennedy Institute, the Consulate General of Ireland is pleased to invite you to 1919-2019: de Valera in Boston & 100 Years of Ireland-U.S. Relations, taking place on Monday, July 1, 2019.

Please join the Consulate, Irish organisations, and friends at the Boston Pride Parade as we march under one banner: Irish For Pride.

Bloomsday Celebration at the Boston Consulate

The Importance of the Arts & Culture in Today's Ireland

Liz McManus, Chair of the Irish Writer's Centre, will be discussing the importance of the arts & culture in today's Ireland during our latest "Lunch and Learn" series.

February Book Club at the Consulate

This month's book is Yours Faithfully, Florence Burke by Ellen Alden

Leading the Way: An Evening to Celebrate Women in Science

The Consulate General of Ireland and the Global Leadership Institute at Boston College cordially invite you to Leading the Way: An Evening to Celebrate Women in Science. Join us for a panel discussion featuring leading women in STEM, as well as remarks from Minister for the Diaspora and International Development Ciarán Cannon.

The Consulate General of Ireland in Boston is seeking a dynamic and motivated Administrative Officer to assist with the day-to-day operations of the Consulate and the provision of consular services.

Irish Art from the Collection of Brian P. Burns

“Irish for Pride” is a collaboration of Irish organizations, partners and friends throughout New England coming together for the 48th Boston Pride Parade on Saturday, June 9th.