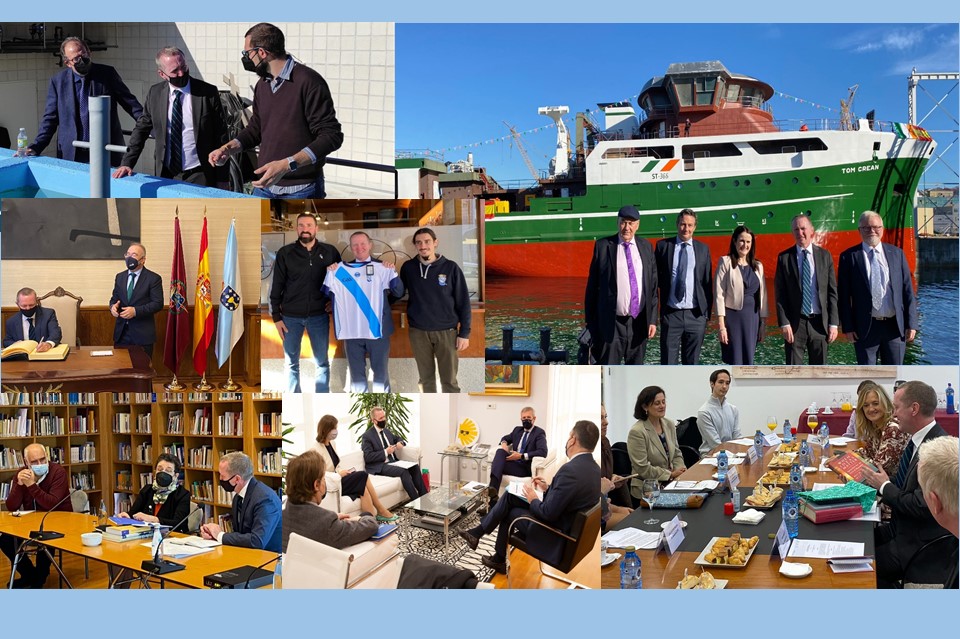 Ambassador Frank Smyth visited the cities of Santiago de Compostela and Vigo in Galicia on 18th and 19th November 2021.  Galicia and Ireland have deep historical links, reflected in the many similarities between our music, culture and mythology.  These connections remain as strong as ever, and today Ireland and Galicia enjoy rich cultural, academic and economic cooperation.  During his visit, Ambassador Smyth met many people and organisations working to keep the connection between Ireland and Galicia alive and vibrant. These include:

Ambassador Smyth also met the Vice-President of the Xunta de Galicia, Don Alfonso Rueda Valenzuela, and Minister for Culture, Education and Universities, Don Ramón Rodríguez González, as well as the Mayor of Santiago de Compostela, Don Xosé A. Sánchez Bugallo.  In these meetings, the importance of the relationship between Ireland and Galicia was underlined.

During his visit, Ambassador Smyth took part in the launch of a new marine research vessel, the R.V. Tom Crean.  This vessel was commissioned by the Irish Marine Institute and is being built in Vigo by local shipyard Astilleros Armon Vigo S.A.  The state-of-the-art vessel will be used by the Irish Marine Institute and other state agencies and Irish universities to carry out environmental, oceanographic and fisheries research.  It represents a significant investment of over €22 million euro and demonstrates the modern-day cooperation between Ireland and Galicia.  The Ambassador also visited the University of Vigo´s Marine Research Centre, where he learned about the cutting edge scientific research being undertaken there.

This visit shows the dynamic and growing relationship enjoyed by Ireland and Galicia, across a wide range of areas from sport to literature to scientific research and tourism.  At the Embassy of Ireland, we are looking forward to working with our partners in Galicia to build even closer links in the future.

Notice: Access to Birth Information in Ireland has changed

Take Part: Conference on the Future of Europe

CLOSED: Tender for the procurement of a provider for grounds maintenance services

Tender for the procurement of a provider for grounds maintenance services

CLOSED: Tender for the procurement of a provider for building maintenance services

CLOSED: Vacancy for PA to Ambassador

The deadline for the submission of applications has passed and this competition is now closed.

Tender for the procurement of a service provider to conduct cleaning services at Ireland House, Madrid

Festival season in Spain is in full swing this week, with a number of great events taking place across July.

Presentation of Hannah Lynch and Spain

Presentation of Hannah Lynch and Spain, Collected Journalism of an Irish New Woman 1892-1903

The Bloomsday Society Madrid invites you to a selection of readings from Joyce, at Ateneo de Madrid, Wednesday 27 February at 7pm