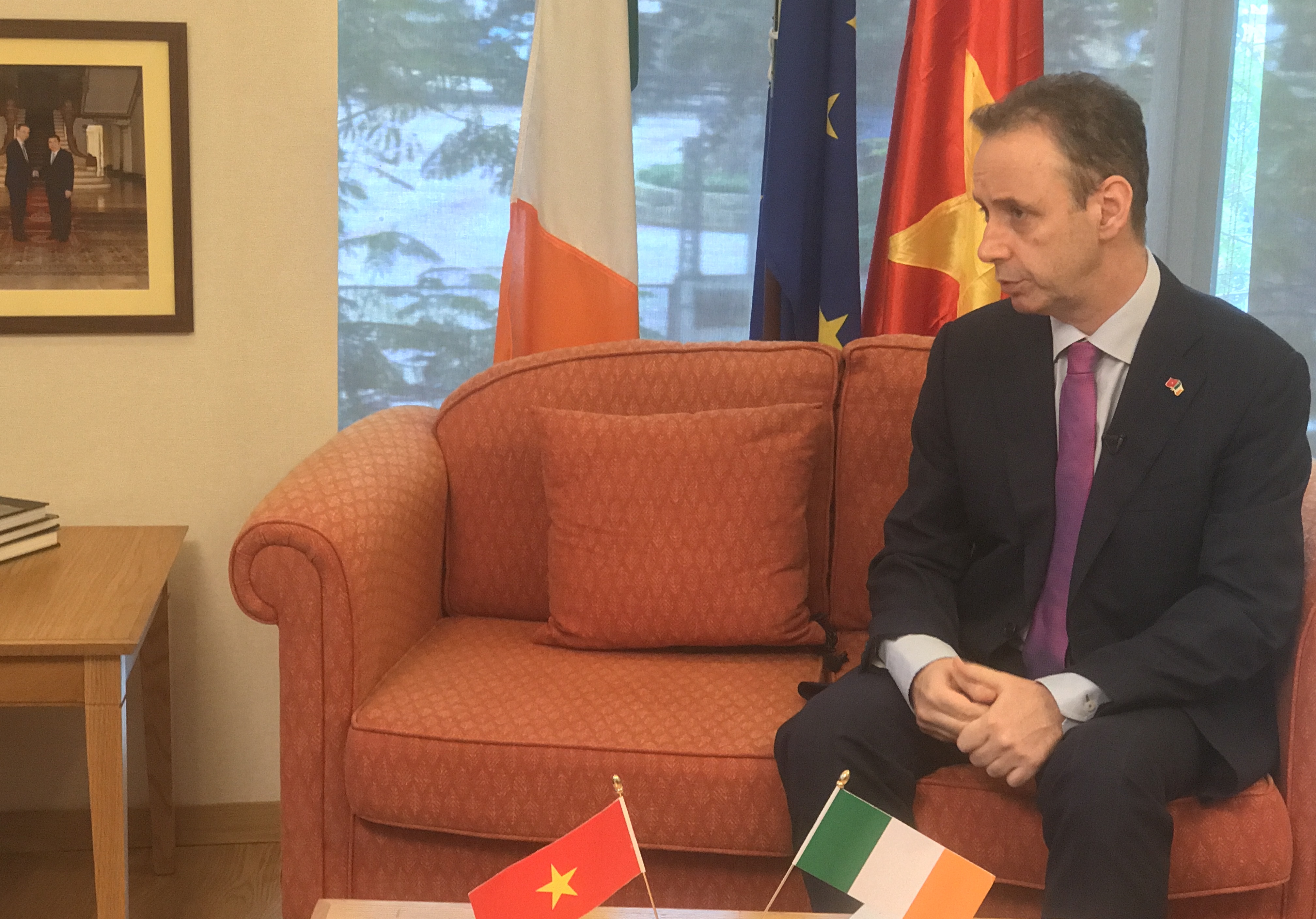 ‘There is great potential to increase bilateral trade and for both countries to benefit.  Vietnam’s growing population and sustained economic growth mean that it is an increasingly important market for Irish and EU businesses.’ – Ambassador of Ireland to Vietnam, John McCullagh talked to VTC 10 and Vietnam Financial Times about EU-Vietnam Free Trade Agreement (EVFTA).

Question: Good morning Ambassador John McCullagh, and thank you for taking the time with us. To start with, what is the role of Vietnam in Ireland's foreign policy? Could you please tell us about Vietnam - Ireland cooperation, especially trade between the two countries in 2019?

Ambassador McCullagh: Good morning.  Thank you for the opportunity to talk to the Financial Times today.

Ireland and Vietnam are different in size and population and are located thousands of miles apart on different continents, but we have much in common:

The Embassy provides consular support for Irish residents and visitors and is the channel for the Irish Govt’s relations with Vietnam, Cambodia and Lao PDR.  We work to strengthen ties with Vietnam and our priorities include to:

On trade, last year total bilateral trade between Ireland and Vietnam amounted to around €500 million.  Pharmaceuticals, food and drink are important exports to Vietnam.  Our imports include footwear and clothing.

Question: How would you assess the potential for further cooperation between the two countries?

Ambassador McCullagh: Naturally we each tend to do more business with our neighbours than with countries further away.  But we believe that there is huge potential to grow our trade and it is one of my priorities in my time here to support this growth.  Half a billion euros sounds like a lot, and it is, but it is small relative to Ireland’s total trade which is in excess of €600 billion.  So there is a lot of room for growth.

It is in both countries’ interests to diversify our markets.  That is something we have been doing in Ireland for many years.  Brexit has underscored the importance of that.

Question: The European Parliament has recently ratified EVFTA and it is expected that Vietnam will ratify the agreement at the next National Assembly session in May. What is Ireland's interest in EVFTA?

Ambassador McCullagh: As a small, open economy, it is important for Ireland and Irish companies that it is easy to do business.  We support the removal of barriers to trade.  Free Trade Agreements are key to this and we are delighted that the EVFTA has been ratified in Europe and hopefully here in Hanoi in two months’ time.

When implemented, the agreement will lead to the removal of 99% of all tariffs, it will cut through red tape (making it easier to trade), it will open up markets and it will provide for enforcement of agreed rules.

It opens the door.  We can start to trade in a more serious way.

Question: How will EVFTA benefit Vietnam - Ireland trade? What are the opportunities for businesses of the two countries?

Ambassador McCullagh: There is great potential to increase bilateral trade and for both countries to benefit.  Vietnam’s growing population and sustained economic growth mean that it is an increasingly important market for Irish and EU businesses.

Not all tariffs will be removed at the same time, but will be phased out over a number of years.  This phased approach will influence the pace of growth in trade.

Question: How do Irish businesses view Vietnam market compared to other ASEAN countries when EVFTA takes into effect?

Implementation of the FTA will continue to contribute to economic growth and to generate even more potential.

Our confidence in the potential is reflected in the recent opening of a new Enterprise Ireland office in Ho Chi Minh city.  Enterprise Ireland is an Irish State Agency that assists Irish companies to forge links and do business internationally.

This is the agency’s first office in ASEAN outside of the regional HQ in Singapore.  The Embassy is working closely with EI to grow business here.  We will look at how best to get the message to Irish companies that Vietnam is open for business and to promote opportunities under the FTA.

Question: With EVFTA, which sectors will Ireland prioritise investment in?

Ambassador McCullagh: For Ireland, under the FTA food is a particular interest.  We have fewer than 5 million people but we grow enough food to feed 25 million.  Our food is traceable and high quality.

Ireland’s food board, Bord Bia, is responsible for promoting EU pork and beef exports to three Asian countries including Vietnam.

There is potential to cooperate on agri-tech to help Vietnam to improve further its food productivity, especially in dairy.

Aviation also offers great potential.  Vietnam has ambitious plans to develop aviation and Ireland is a world leader in aviation with more than 40% of all commercial leased aircraft managed or leased out of Ireland.  Irish-based companies are active in aviation-related fields such as crew training, in-flight entertainment, and aircraft maintenance and inspection.

Question:  What is the proportion of Vietnam’s goods in the import structure of Ireland? What Vietnam should do to increase import to Ireland?

Ambassador McCullagh: It will be important for Vietnam to continue to promote the opportunities that the FTA will bring.  FTA’s are comprehensive agreements but they are also complex.  Business will do its own research of course, but it would be helpful, for example, to highlight that new simpler common customs procedures have been agreed under the FTA and to outline how these will work.

Similarly in order for Vietnam to secure the best deal from opening up public procurement to EU companies, it will need to put in place the agreed central web portal for advertising procurement opportunities and to make summaries of procurement notices available in English.

The opportunities to increase trade and mutual prosperity of Vietnam and the EU are immense.  Within the EU, Ireland could be a particularly important partner for Vietnam.  We are committed EU members.  The departure of the UK means that Ireland is the only EU MS where English is a native language.

1,400 international companies have their European bases in Ireland.  These include the top 10 pharma companies, the top 15 software companies and all but one of the top 15 global medical devices companies.  Our location, at the crossing between the EU and the USA means that we are ideally placed as a springboard for trade within the EU and beyond.