The International Court of Justice (ICJ) in The Hague, also known as the World Court, is the principal judicial organ of the United Nations. It began work in 1946, when it replaced the Permanent Court of International Justice (PCIJ) which had functioned since 1922.  It operates under a Statute annexed to the UN Charter. UN Charter and Statute of the ICJ, as published in the Irish Treaty Series. 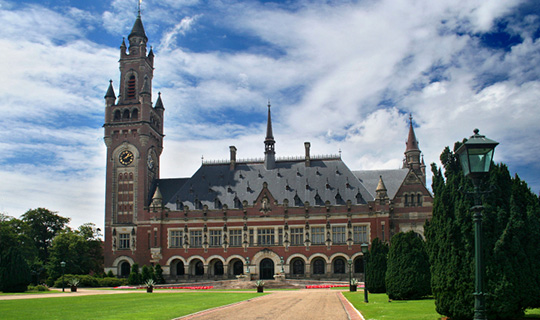 The ICJ has a dual role: to settle in accordance with international law the legal disputes submitted to it by States, and to give advisory opinions on legal questions referred to it by duly authorised international organs and agencies.

The peaceful settlement of disputes is one of the primary functions of the United Nations as is evidenced by references to such settlement in the UN Charter. All Member States of the United Nations are automatically Parties to the Statute of the ICJ, which forms an integral part of the UN Charter. In addition, States may make a declaration under article 36(2) of the ICJ Statute accepting the jurisdiction of the Court as compulsory in settling legal disputes with other States which have similarly made a declaration under article 36(2). On 15 December 2011 Ireland declared that it recognised as compulsory ipso facto and without special agreement, in relation to any other state accepting the same obligation, the jurisdiction of the International Court of Justice in all legal disputes as specified in Article 36, paragraph 2, with the exception of any legal dispute with the United Kingdom of Great Britain and Northern Ireland in regard to Northern Ireland.

Although the Court's judgments are binding only on the parties to any particular case, given the calibre of Court's judges and its status as the principal judicial organ of the UN, decisions of the ICJ are themselves often cited as evidence of international law. The Court has given important decisions and opinions on such topics as the law of the sea, boundary disputes, the use of force and the legality of the threat or use of nuclear weapons. The text of the Court's decisions may be accessed from its website.