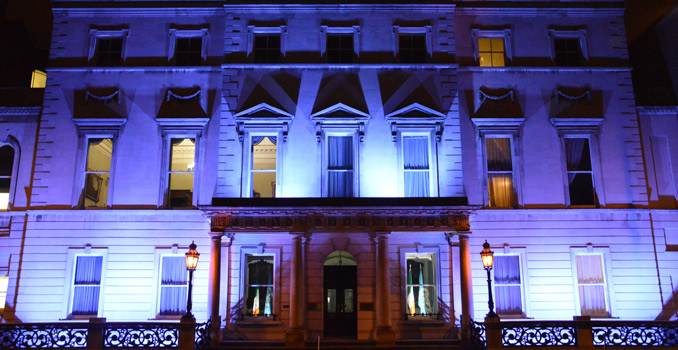 On Saturday 24 October 2015, Iveagh House, the beautiful and historic headquarters of the Department of Foreign Affairs and Trade, turned “UN Blue” to mark the 70th anniversary of the United Nations.

Iveagh House joined a host of other buildings and monuments across the globe in celebrating 70 years since the founding of the UN. Some of the iconic structures that joined us in turning UN Blue were the Pyramids at Giza, the Empire State Building, the Sydney Opera House, the ancient city of Petra in Jordan, the Great Wall of China and Edinburgh Castle.

The United Nations encouraged participation in the inaugural “Turn the World UN Blue” campaign “in order to offer the unique opportunity to help unite global citizens, promote the message of peace, development and human rights, and showcase your commitment to the ideals and principles of dignity and prosperity for all.”

“I am delighted that we are joining with fellow members of the United Nations across the world in marking the 70th anniversary of its foundation in this very special way.

"This initiative helps remind Irish people of our country's strong connection to the UN. Over the last 60 years, Ireland's legacy as a member of the UN has included playing a leading role in Nuclear Non Proliferation and Disarmament and, more recently, co-facilitating agreement on the historic Sustainable Development Goals.

“The UN is engaged in important work in all corners of the world and we in Ireland are, and will remain, fully supportive of that work.”

Though our membership of the UN, Ireland has also played a significant role in the promotion of international peace. We have an unbroken record of service to blue-helmet peacekeeping since 1958, serving in such difficult and challenging places as the Middle East, the Congo and West and North Africa. Ireland currently deploys 382 members of Defence Forces and An Garda Síochána to 7 UN Missions in Cyprus, Lebanon, Golan Heights, the Middle East, Democratic Republic of Congo, Ivory Coast, and Western Sahara.

Ireland’s membership of the United Nations has been central to our foreign policy since we joined in 1955. The principles and values enshrined in the UN Charter are those which Ireland has always strived to promote and protect. The Department was thrilled to take this opportunity to proudly highlight our commitment to UN values and to mark not only the 70th anniversary of the UN but also the 60th anniversary of Ireland’s membership of the UN that we are celebrating this year.

The Department of Foreign Affairs and Trade’s UN60 programme celebrates this 60th anniversary of Ireland’s membership of the United Nations. Ireland joined the United Nations on 14 December 1955, along with Albania, Austria, Bulgaria, Cambodia, Finland, Hungary, Italy, Jordan, Laos, Libya, Nepal, Portugal, Romania, Spain and Sri Lanka. Up to 1955 there were 60 members and in 1955, Ireland joined with 15 other states bringing the number to 76.

The programme was launched during the visit to Ireland by UN Secretary General Ban Ki-moon in May this year.  The initiative includes, among other things, the creation and distribution of a special UN60 Classroom Map to every school in Ireland, an inaugural UN Youth Delegate Programme, an anniversary exhibition, an event marking Ireland’s contribution to UN peacekeeping, and an Open Policy Debate.