Download the Yeats 2015 Report to learn more about the Department's activities in support of Yeats 2015.

Promoting Ireland through our culture

By showcasing Ireland’s rich cultural heritage, we can reap long-term benefits for Ireland’s international reputation and enhance the way people view our country. 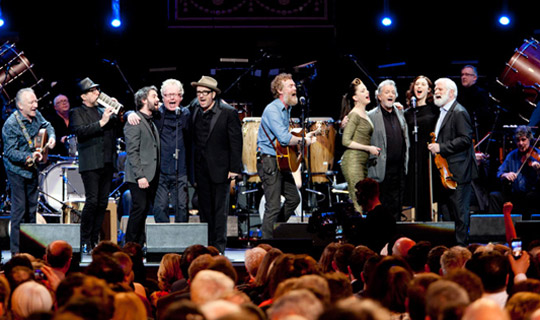 Ireland’s culture is a unique national strength, which defines us on the world stage. The global impact of Irish culture is one of our greatest competitive advantages, acting as a ‘door opener’ that helps to secure jobs, trade, investment and tourism. It’s also our most effective way of connecting with the global Irish diaspora and the cultural sector is a dynamic and growing part of our economy.

We’re involved in a broad range of cultural activities, which all share one thing in common – they raise awareness of Ireland overseas. Cultural diplomacy is an important part of the broader public diplomacy work of our Embassy network. It allows us to promote Ireland to a much broader audience than traditional government-to-government contacts. We promote cultural relations through a number of initiatives:

We support a number of travelling exhibitions on the life and works of notable Irish cultural figures, including James Joyce, William Butler Yeats and Samuel Beckett. An exhibition focusing on the role of Irish emigrants in Europe from 1600 to 1800 was developed to celebrate Ireland's Presidency of the Council of the European Union in 2013, and has been translated into six languages and exhibited across the continent of Europe. The year of Irish Design 2015 was celebrated with a travelling exhibition presenting the achievements of Ireland's dynamic design business at home and abroad. In 2016 Embassy Mexico launched an exhibition focusing on the contribution of the Irish in Latin America from the 17th to the 20th century, including their engagement in independence and revolutionary movements in the region.

Our Embassies abroad also organise specific cultural initiatives and events, which help to promote Ireland and support the achievement of broader diplomatic objectives. The St. Patrick’s Day period is a particular focus for cultural activities each year, along with other annual celebrations such as Bloomsday.

We also provide funding to two major organisations from our cultural relations budget:

Irish Studies is now taught as a discipline in countries all over the world – from North and South America to Europe and even as far afield as China. We support Irish Studies programmes abroad as part of our efforts to promote Ireland’s culture. This benefits Ireland by:

Download the Yeats 2015 Report to learn more about the Department's activities in support of Yeats 2015.