Premier Li Keqiang, the second most senior figure in China’s Government, visited Ireland for the first time in May 2015. He was accompanied by his wife, Professor Cheng, as well as a 119-strong delegation, that included eight senior Chinese Government Ministers as well as officials and Chinese media. 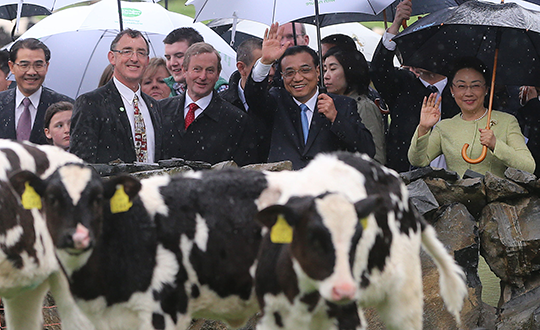 The visit by Premier Li followed on from the State Visit to China by President Higgins in December 2014 and focused strongly on trade and agriculture. The economic relationship between Ireland and China is an increasingly valuable one for both countries : 92 Irish companies employ over 10,000 people in China, and total bilateral trade in 2014 amounted to almost €8 billion. In 2015, Irish food and drink exports to China amounted to €654 million, an increase of 26% on 2014.

The Taoiseach and Premier Li visited a farm in County Mayo, run by the Garvey family, to give the Premier first-hand experience of Ireland’s high-quality agri-food sector and to help promote Ireland as an environmentally friendly tourism destination. The farm visit also included traditional Irish music and dance, reflecting the strong interest in Irish culture in China.

The Taoiseach and a delegation of Irish Government Ministers subsequently held a bilateral meeting with Premier Li and the Chinese Ministerial delegation at Ashford Castle. Opportunities for increasing trade between Ireland and China were explored and issues relating to human rights, the UN and climate change were also discussed.

The visit also saw the signing of a memorandum of understanding on cooperation in agricultural matters, ensuring that Ireland can continue to build on and expand its relationship with a priority trading partner. A diplomatic visa waiver agreement to facilitate increased official exchanges between Ireland and China was also concluded.