Ireland was honoured to welcome Prime Minister Narendra Modi of India on 23 September 2015, the first visit by an Indian Prime Minister since that of Jawalarlal Nehru in 1956. 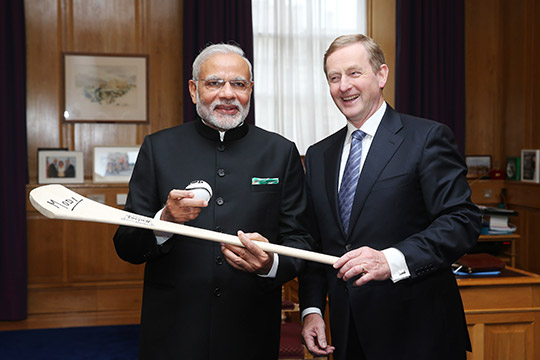 Despite the geographic distance between us, the histories of Ireland and India are entwined. Strong links previously existed between the Independence movements in both countries and people to people links likewise remain strong to this day. The Indian community makes an enormous contribution to Irish society in areas ranging from small family businesses to the IT sector and particularly in health care across our country.

The Department of Foreign Affairs and Trade and Ireland’s Embassy in New Delhi have been working hard to strengthen Ireland’s bilateral trading relationship with India, which is one of the world’s fastest growing major economies. Ireland exported over €55m worth of indigenous products to India in 2015 and 40% of the commercial leased aircraft operating in India are currently owned or operated from Ireland. Also in 2015, over 25,000 Indians visited Ireland and 2,000 chose to study here at third level. There is significant potential to develop trade and tourism even further, given India’s rapidly growing middle class in an overall population of 1.2 billion.

An Taoiseach Enda Kenny hosted a working lunch for PM Modi and his delegation at which the Minister for Foreign Affairs and Trade Charles Flanagan, Minister for Health Leo Varadkar and Minister for Education and Skills Jan O’Sullivan also attended. A wide range of issues were discussed, including trade, visa policy, disarmament issues and reform of the UN Security Council.

The visit also provided a significant boost to Ireland’s visibility in India, with Prime Minister Modi having more than 20 million followers on Twitter.