A 12-month programme of over 600 events and activities, the Year of Irish Design 2015 (ID2015) introduced over 2,000 Irish designers to an audience of over 1.4 million people around the world. The focus was on Irish design achievements, from animation to architecture, fashion to furniture and medical to engineering innovations. 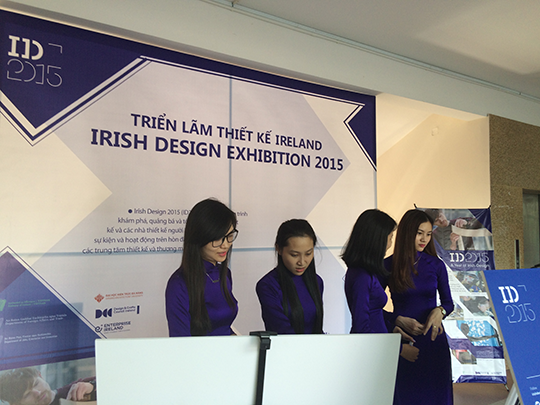 The ID2015 programme was developed by the Design & Crafts Council of Ireland and promoted internationally by the Department and Ireland’s Embassies and Consulates abroad. By organising showcase events in key design capitals, hosting networking events and trade missions, and developing relationships between designers, buyers and industry representatives around the world, we increased awareness of the value of Irish design, both as a fundamental element of our culture and as a driver of our economic growth.

In total, the Embassy and Consulate network supported more than 100 events and activities promoting ID2015 and showcasing Irish excellence and innovation in design.  A special Connections capsule representing a range of Irish designers and projects travelled to twenty four cities around the world, including Stockholm, New York, Sydney and Tokyo.  Focusing on Irish 'Life and Progress' and 'Society and Culture', the exhibition also included a library presenting an overview of the history and development of Irish design.

More details about the events of ID2015 can be found on the Irish Design website at www.irishdesign2015.ie.

A full report on ID2015 activities by the Embassy and Consulate network is available at https://www.dfa.ie/our-role-policies/our-work/casestudiesarchive/2016/january/id2015-irish-embassy-events/