On 21st May the Embassy hosted the EU Ambassador to South Sudan, Sinead Walsh who gave a talk entitled ‘Humanitarian Diplomacy in Challenging Situations’.  Ambassador Walsh is an Irish Diplomat on secondment to the EU Delegation and was Irish Ambassador to Sierra Leone during the Ebola Crisis.  She has co-authored a book with Dr. Oliver Johnson entitled ‘Getting to Zero; a Doctor and a Diplomat on the front line’ which relates what it was like to work on the frontlines of an epidemic. They expose the often-shocking shortcomings of the humanitarian response to the scourge, both locally and internationally. They also profile the immense courage of those who put their lives on the line every day to contain the disease. Both harrowing and hopeful, their story is the definitive account of the fight against an epidemic that shook the world.

During her extremely well-received address to an audience which included representatives from the Holy See, a large number of Ambassadors accredited to the Holy See, and many religious representing colleagues working on the front line in difficult situations in Africa, Ambassador Walsh spoke both about the lessons learned during the Ebola Crisis and the current situation in South Sudan.  South Sudan’s political leaders undertook a retreat at the Vatican in April and Pope Francis has said that he wants to visit the country. 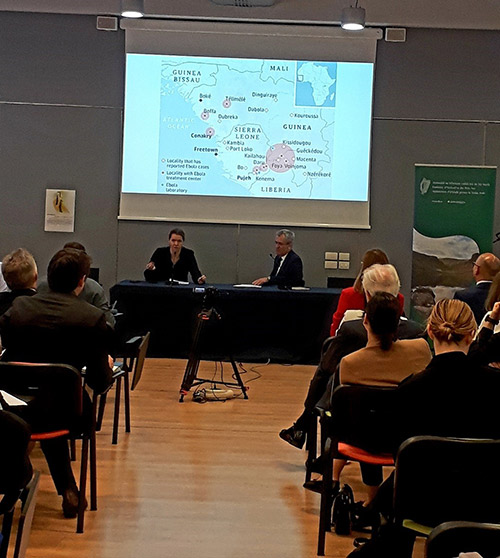