The Embassy of Ireland invites you to an evening of poetry and music to mark St Brigid’s Day with poet, Moya Cannon, and harpist, Kathleen Loughnane.

Moya Cannon, one of the most prominent modern day Irish poets, focusses in her work on our visceral attachment to the beauty of the earth.  Her poetry sings of deep connections.  Originally from Co. Donegal (northwest Ireland), she has spent most of her writing life in Galway (west Ireland). A winner of the Brendan Behan award and of the Lawrence O’Shaughnessy award, she has edited the Poetry Ireland Review and was 2011 Heimbold Professor of Irish Studies at Villanova University. Her poems have been widely translated and she is a member of Aosdána, the Irish affiliation of creative artists.

The harpist, Kathleen Loughnane was a founder member of the celebrated group Dordán, and has taught and performed at major festivals in the US, Japan and throughout Europe. She was invited to play at the World Harp Festival in 2005 and a nominee in the Irish Music Meteor Awards 2010. Kathleen has five CDs and accompanying books to her credit and has been the recipient of Arts Council Deis awards for her research and interpretation of the music of the early harpers.   Kathleen’s programme in Warsaw will feature the music of Irish harper-composers of the 17th and 18th Centuries, such as the Connellan brothers and Turlough O’Carolan.

Professor Barry Keane, Warsaw University and his daughter Julia will facilitate the evening. 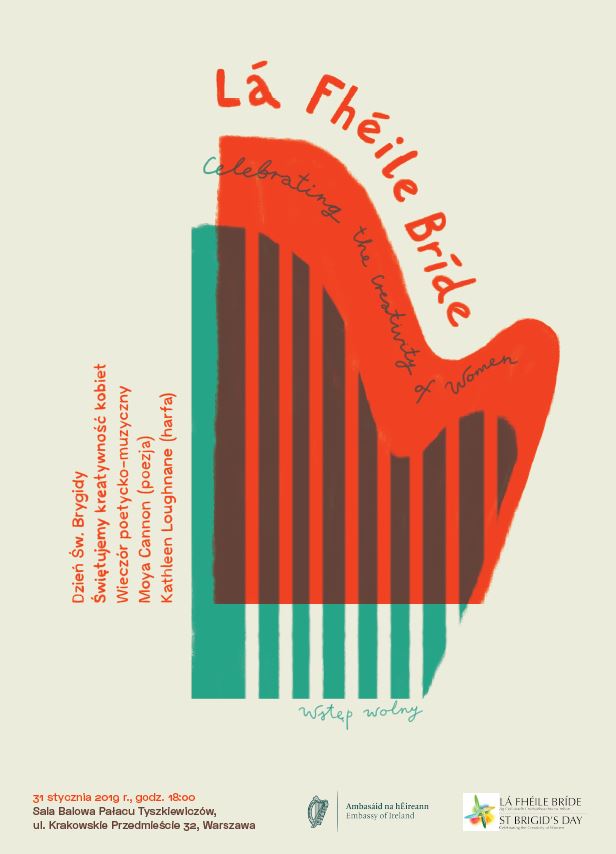 Bloomsday is an annual celebration of James Joyce that takes place in Dublin and around the world on 16 June, the date depicted in Joyce's most famous novel, 'Ulysses'.

The Embassy of Ireland in Poland is seeking to hire a Temporary Research Assistant.

The Government of Ireland is organising consultations with the Global Irish community as part of the preparation of its new Diaspora Strategy.

St. Patrick’s Day in Poland: The Greenest Day of the Year!