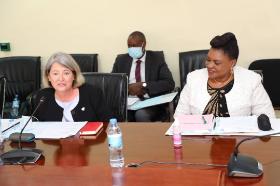 Ambassador Mary O'Neill attending the Legislative Support project board meeting in Dodoma, in June 2021. She is flanked by Hon. Jenista Mhagama, Minister in the Prime Minister’s Office.

Throughout the globe, legislative bodies play a role in facilitating representation of citizens, holding governments to account, and enacting laws. The effectiveness of any legislature in performing these standard functions depends on its members’ skillset, and whether the institution is sufficiently inclusive and transparent.

This article provides a brief reflection on the progress made in promoting gender equality and inclusion in the Parliament of Tanzania, in commemoration of this year’s International Women’s Day under the theme - ‘Gender equality today, for a sustainable tomorrow.’

In line with the commitments to help strengthen the governance of key institutions, and based on country-level demands, Ireland approved support in 2017 for phase two of the initiative to further enhance the capacity of the parliament of Tanzania (Legislature Support II i.e.; LSP II). Two partners – the Parliament of Tanzania, and the United Nations Development Programme (UNDP) - worked together in designing, and implementing the project, under a National-Implementation Modality.

Legislature Support II had the overall objective of making the Parliament of Tanzania more transparent, accountable and inclusive. This milestone was informed by the fact that women parliamentarians occupy less than 40% of the National Assembly seats, with 30% made up of statutory special seats. As such, the level of ambition set by the overall objective entailed establishing the basis for advancing gender equality within the Parliament, by developing and implementing a robust gender strategy. It also involved sharpening parliamentarians’ skills to scrutinize bills and budgets, and engage effectively with citizens.

As of February 2021, a full final year of the project, Ireland had contributed a total of €1.2M to LSP II. Other project funders included United Kingdom’s FDCO, Sweden, and Denmark. UNDP contributed a share of resources through its internal resource allocation mechanism.

A final independent evaluation of the project uncovered evidence of overall increase in parliamentarians’ capacity to exercise their oversight role, and singled out the adoption of a comprehensive gender strategy, and amendment of standing orders as important progress markers. It also noted that a coterie of male parliamentarians who came forward as champions of gender equality had played a significant role in challenging norms that impede inclusion and equality.

Moreover, the evaluation documented compelling evidence that special seats parliamentarians grapple with status and resource iniquities that have proven difficult to resolve from within the Parliament. For instance, because special seats Parliamentarians are not tied to a constituency, they cannot access or influence allocation of resources from the constituency development fund. Besides, their broad scope of work makes assessment of performance arbitrary, limiting both visibility and recognition. The implication is that gender equality stakeholders need to implement robust strategies that address internal, and external constraints.

The parliament of Tanzania is characterized by a high turnover rate at every election. For instance, more than 60% of legislators in the current parliament (2020-2025) are serving for the first time. The turnover rate undermines progress made in capacity building as knowledgeable legislators – including those in special seats - are replaced by first time representatives. This remains a key challenge to the efforts to make the institution more effective, and shows that the quest to advance gender equality, and enhance the effectiveness of the institution requires long term engagement and, a clear focus on addressing structural limitations.

Joint Statement by Heads of Missions ahead of 2020 General Election

Tackling COVID-19 through research with REPOA

REPOA (Policy Research for Development) is regarded as the preeminent think tank in Tanzania. They undertake policy research and engage in dialogue with the Government of Tanzania and other stakeholders to support the development of socioeconomic policies for inclusive development.

The Ireland-Africa Fellows Programme will this year offer a select number of future leaders and influencers from Tanzania the opportunity to study for a prestigious Master’s degree in Ireland. If successful, you will live and study at some of the top education and learning centres in the world.