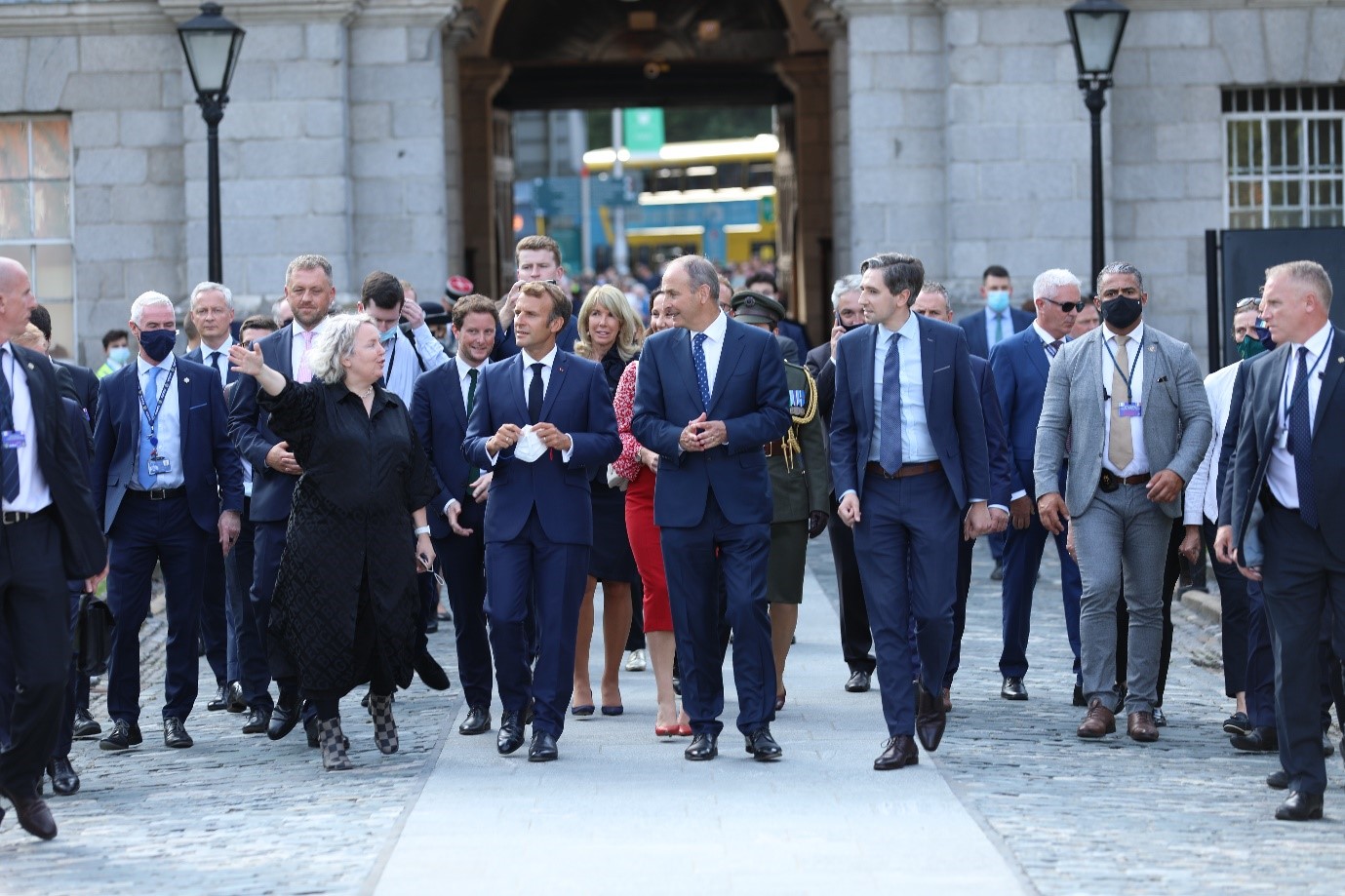 President Macron was accompanied by a number of French  Ministers Jean-Yves Le Drian (European and Foreign Affairs), Bruno Le Maire (Economy, Finance and the Recovery) and Clément Beaune (Secretary of State for European Affairs) who met with their Irish counterparts, Simon Coveney, Paschal Donohoe and Thomas Byrne as part of the visit.

Subjects discussed over the course of the bilateral meetings included pressing issues on the EU and International agenda, including Afghanistan, the response to Covid-19, economic recovery, the upcoming French Presidency of the EU Council of Ministers and EU-UK relations.

Ireland has recently announced the opening of a new consulate in Lyon, further enhancing links between France and Ireland.

To see a full read out of the official statement by Taoiseach Martin during the visit, see here.

This page was last updated on 13 September 2021 and provides information on travel between France and Ireland and the Embassy's consular services.

Visit by Prince Albert II of Monaco to Dublin

Ireland and France have agreed a Joint Plan of Action (2021-2025) to strengthen and deepen relations between the two countries across a range of cultural, educational and political activities.

Visit by Minister Le Drian and Secretary of State Beaune to Dublin, May 2021

Rights of EU Citizens in France

The Embassy has teamed up with the Ville de Paris to find out what rights and services Irish people and other EU citizens living in France are entitled to. Hermano Sanches Ruivo is Deputy Mayor for European Affairs, Paris. Marina Burke is the Irish representative on the Conseil parisien des Européens.

Letter from Ambassador O’Brien to the Irish Community in France, 26 March 2020

The Irish Embassy in France

Hitting the slopes in France this winter? Follow our tips to stay safe and enjoy your holiday to the fullest!

Brigid's Day in Paris - Celebrating women in business, politics and the arts

On 31 January 2020, the Embassy of Ireland in Paris will hold a day of events to mark Brigid's Day, celebrating the contribution of women to the fields of business, politics and human rights, and the arts.

Brexit and the future of Europe – Irish and French perspectives

On Tuesday 25th June 2019, at 18h, the Embassy of Ireland in France will host, in collaboration with the Dublin City University Brexit Institute, a panel discussion on “Brexit and the future of Europe – Irish and French perspectives”

Tánaiste and Minister for Foreign Affairs, Simon Coveney, will take the opportunity to share his insights on Brexit, examine the potential impact on Ireland, and speak more generally on the Europe of 27, in Paris on 15 March 2019.

Internship at the Embassy of Ireland, Paris

The Embassy of Ireland is currently accepting applications for two 6-month internships. The closing date for applications is Friday April 20, 2018.