Irish citizens living, working and studying in the UK: Information about the Common Travel Area

The Common Travel Area (CTA) is a long-standing arrangement between Ireland and the UK which means Irish citizens can move freely to live, work, and study in the UK on the same basis as UK citizens and vice versa. It provides for associated rights and privileges including access to employment, healthcare, education, and social benefits, as well as the right to vote in certain elections. The CTA is an arrangement that is valued on both islands and its continuation is a stated objective of both the Irish and UK Governments. It predates Irish and UK membership of the European Union and is not dependent on it.

What happens in different scenarios?

Detailed work is at an advanced stage, both in Ireland and with the UK, to ensure that all necessary provisions are made in both jurisdictions so that the CTA continues to function effectively. Both the Government of Ireland and the UK Government have committed to maintaining the CTA in all circumstances.  This has been specifically provided for by the UK Government in their "no deal" planning notices.

Do I need to apply for Settled Status?

The UK Home Office has already indicated that Irish citizens will not need to register or take any action under the Settled Status scheme. They will continue to hold their Common Travel Area rights which are not reliant on EU membership. However, as EU citizens, Irish citizens – if they so wish – will be able to apply under the Settled Status scheme when it is open for applications. Circumstances which may be relevant include where an Irish citizen has close family members and/or dependents who are neither Irish nor British and hence are not covered by the CTA.

Still have questions? Read more about the Common Travel Area.

Useful information about Irish Citizenship, Passports and Visas can be found at the following links:

Sign up for the Irish Government regular Brexit Update email 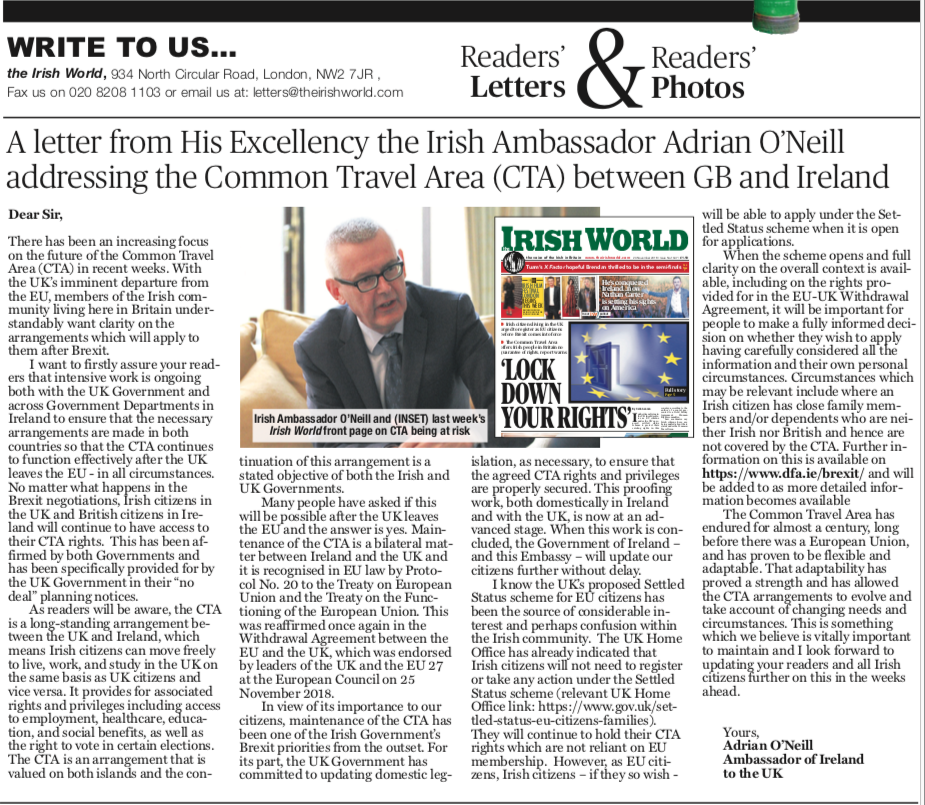