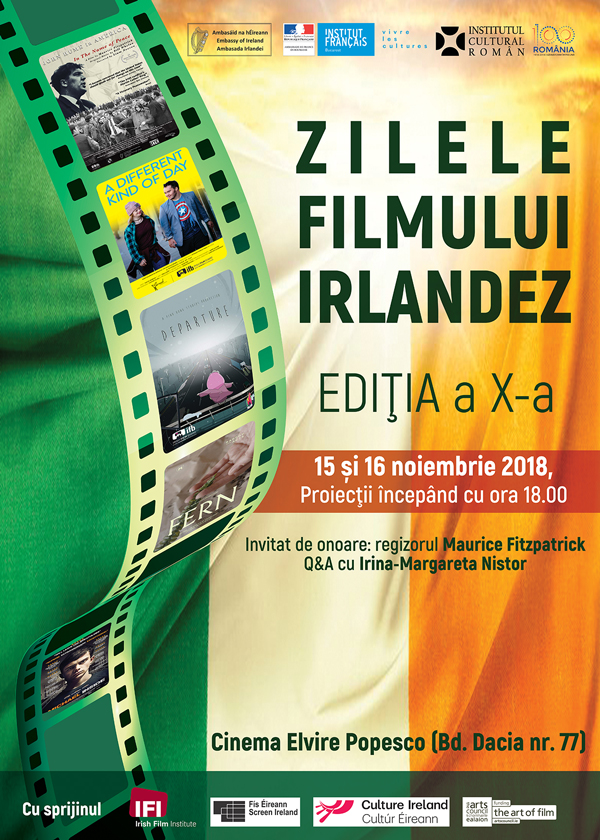 "In the Name of Peace – John Hume in America"

among the highlights at

The Embassy of Ireland is pleased to announce that the tenth Irish Film Days Festival to be held in Bucharest will take place at Cinema Elvire Popesco on 15 and 16 November.

This annual event is supported by the Irish Film Institute, Screen Ireland, Culture Ireland and the Arts Council/An Comhairle Ealaíon, in partnership with the Romanian Cultural Institute and the French Institute.

This year's festival programme features In the Name of Peace – John Hume in America, directed by Maurice Fitzpatrick (Thursday, 15 November) and Michael Inside directed by Frank Berry  (Friday, 16 November). Each feature film will be preceded by a short film.

Screenings start at 18.00. Entry is based on ticket (cost 10lei-15lei/entrance) on a first come, first served basis.  The films, which will have Romanian subtitles, will be briefly introduced by Ambassador Derek Feely and film critic Irina-Margareta Nistor. The showing of the In the Name of Peace – John Hume in America documentary film will be followed by a Q&A session led by Irina-Margareta Nistor with the participation of Film Director Maurice Fitzpatrick.

In the Name of Peace – John Hume in America (2017). Exploring the decades-long campaign by Nobel Prize winner John Hume to secure peace in Northern Ireland, Maurice Fitzpatrick reveals how Hume enlisted an army of heavy-weight international heads of state to the cause. Narrated by Liam Neeson the documentary includes interviews with Presidents Clinton and Carter, US senators and congressmen, as well as Irish leaders, and British Prime Ministers Tony Blair and John Major. Trailer: https://www.youtube.com/watch?v=zafhOg79l0o

A Different Kind of Day (2018), short film directed by Maria Doyle Kennedy tells the story of a random encounter between two young adults who have Down Syndrome and a group of youths. Trailer: https://www.youtube.com/watch?v=YjAXoAkttYk

Michael Inside (2017) directed by Frank Berry is about Michael McCrea, an impressionable 18-year-old who gets caught holding a bag of drugs for his friend's older brother and is sentenced to three months in prison. Winner of a brace of well-deserved awards including Best Feature Film at IFTAs (Irish Film & Television Academy). Trailer: https://www.youtube.com/watch?v=BGtf81pNTnc

Departure (2018) directed by Aoífe Doyle is about a lonely Irish grandmother who unexpectedly gets to spend Christmas in Australia, with her emigrant family.

Fern (2017) directed by Johnny Kelly is a light-hearted comedy presenting an unusual relationship developed between a fern plant and a widow, which conceals sombre undertones. Trailer: https://vimeo.com/227051711

To mark 30 years of diplomatic relations between Ireland and Romania, the Embassy of Ireland in collaboration with the Romanian Cultural Institute marked the occasion with the production of a short film on Bloomsday.

Irish Tillage and Land Use Society (ITLUS) visit to Romania

Launch of the James Joyce - His Life and Works exhibition

Launch of the James Joyce - His Life and Works exhibition in the Palace of Parliament on Wednesday, 16 May 2018 in the presence of a number of Ambassadors and other diplomats, Embassy friends, representatives of the Irish community and visitors.

Embassy of Ireland stand in collaboration with Romania Ireland Business Association and STEYsha performance at the 5th EU Member States Market held in Cismigiu Park on Saturday, 5 May 2018.

The International Olympiad of Reading encourages students to approach reading as a genuine source not just of pleasure and entertainment but for personal development and the learning of life skills.