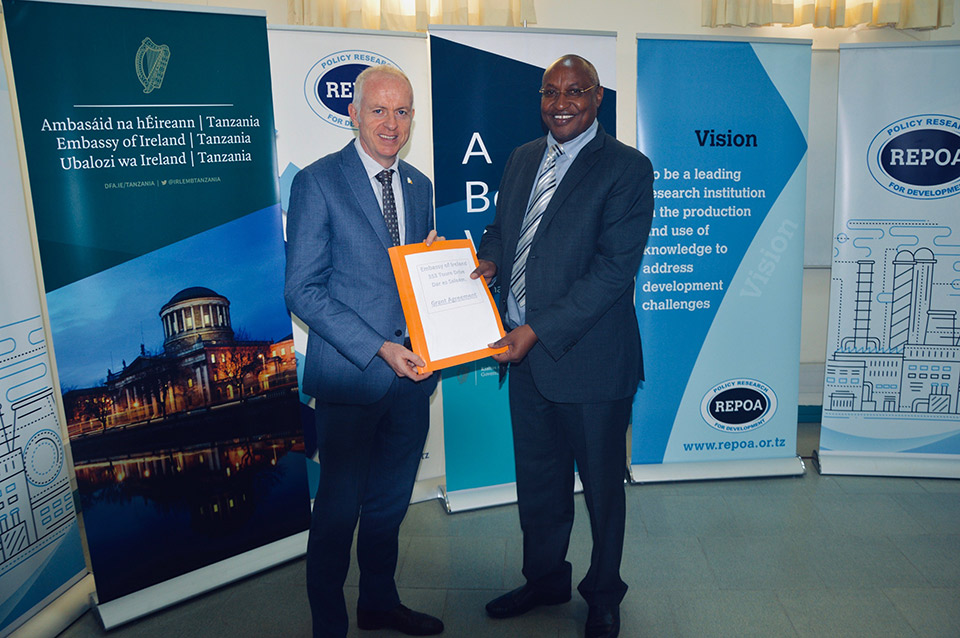 Today, Ireland launched a new partnership worth €500,000 (Tsh 1.3 billion) with REPOA. The funding will support research on effective policies for Tanzania’s inclusive economic growth. The partnership is expected to continue for the next three years with similar levels of funding each year.

“Independent evidence-based research is an invaluable contribution to the economic policymaking process. Academic institutions and think-tanks can be key to building a competitive economy and sustainable growth.

Ambassador Sherlock spoke of Ireland’s experience of economic development during the 1960s when independent policy think-tanks played an important role in convincing the Irish Government to undertake major reforms and investments in the Irish education system. He highlighted that these reforms:

“…are still recognised as being a turning point in Ireland’s transformation to a modern knowledge-economy. Today, the Irish Government continues to prioritise investment in research. Ireland is becoming a world leader in generating and using new knowledge for economic and social progress and has risen to 10th place in the Global Innovation Index”

Ambassador Sherlock praised REPOA for the pivotal role which it plays in Tanzania’s research ecosystem. He noted that it has consistently ranked as the top think tank in Tanzania and among the top 20 in sub-Saharan Africa.  Ireland attaches particular importance to REPOA’s work on youth employment which is a key driver for sustainable and inclusive economic growth.

“The full inclusion of Tanzania’s youth in their country’s economic growth is key to ensuring that no-one is left behind. Creating enough quality jobs for young men and women which provide decent incomes is the central as good quality jobs will result in a more competitive and more inclusive economy, for all.”

Ambassador Sherlock also emphasised the potential impact of REPOA’s planned work relating to women’s economic empowerment. This work will examine gender gaps in the labour market, in business and property ownership and in agricultural value chains.