Joyce enthusiasts and literary scholars refer to this episode of Ulysses as ‘Aeolus’. In this case, the parallel Joyce seeks to draw with Homer’s Odyssey is worth knowing about because it illuminates the point Joyce was trying to make. In Greek mythology, Aeolus is the king of storms and winds, who gave Odysseus an ox-skin bag "stuffed full inside with the courses of all the blowing winds". This would help Homer's wanderer to sail safely home to Ithaca. Aeolus's bag of wind worked wonderfully well until Odysseus's crew, hoping to find gold inside, opened the bag. Then, "the winds all burst out" and "the storm caught them away and swept them over the water weeping, away from their own country."  In this episode, the winds are verbal, with Joyce suggesting that many of his characters are windbags, blowing Dublin off course.

This episode has been described as "a forerunner to the book's later stylistic extravagances" and as the place where Joyce's writing "picks up momentum, complexity and difficulty - along with virtuosity and wonder." (The Cambridge Companion to Ulysses, pages 65 & 113)For the reader, the most striking expression of narrative novelty (or subversion, call it what you will!) is the insertion of capitalised, newspaper-style headlines throughout the text - IN THE HEART OF THE HIBERNIAN METROPOLIS, HOW A GREAT DAILY ORGAN IS TURNED OUT, MEMORABLE BATTLES RECALLED, LINKS WITH BYGONE DAYS OF YORE etc. These headlines become more outlandish as the episode progresses – DIMINISHED DIGITS PROVE TOO TITILLATING FOR FRISKY FRUMPS. ANNE WIMBLES, FLO WANGLES – YET YOU CAN BLAME THEM? These headlines were inserted by Joyce at a relatively late stage in the composition of Ulysses and are not essential to understanding this episode.

I have a confession to make. Although the Aeolus episode of Ulysses was apparently a favourite of James Joyce's, and is beloved of literary critics, it is not one that I particularly like. This may be because, unlike the three episodes that precede it in which Leopold Bloom is omnipresent, here he appears, exits and then returns at the end of the episode. The bulk of these pages are populated by Stephen Dedalus, his father Simon and a host of minor characters, some of whom will briefly reappear later in the novel.

Whereas the earlier chapters have given us a deepening familiarity with the intriguing contours of Bloom's mind, in Aeolus we only enter his inner life quite fleetingly. For me, this makes this episode less attractive than its predecessors and those that follow. This episode is significant, however, for it is where the wanderings of its two main characters, Bloom and Stephen, come together, although they do not meet until much later in the novel, at a point towards the culmination of Bloom's odyssey.

As ever with Joyce, there is some vivid descriptive writing in these pages.

"Gross booted draymen rolled barrels dullthudding out of Prince's stores and bumped them up on the brewery float."

And this episode consists mainly of dialogue, with the raciest lines reserved, as in the Hades episode, for the inimitable Simon Dedalus.

"Agonising Christ, wouldn't it give you a heartburn on your arse?"

Aeolus is set in the offices of the Freeman's Journal and Dublin's Evening Telegraph. These sister papers had been in existence since the 1760s. They survived until 1924 by which time dramatic political change in Ireland had rendered their form of Irish nationalism, drawn from the parliamentary struggles of the 19th century, somewhat obsolete. In 1904, the Freeman's Journal, which had taken Parnell's side in the great parliamentary split of the 1890s, was a supporter of the reunited Irish Party and its leader, John Redmond.

Until now, we have seen Bloom at home and eavesdropped on his intriguing relationship with his wife Molly (Calypso), we have accompanied him through the streets of Dublin and into a church (Lotus Eaters), and we have travelled to a funeral in his company (Hades). Here we get a look at Bloom's professional life as a canvasser for newspaper advertisements, a not especially successful purveyor of "the gentle art of advertisement."

Bloom is busy in the newspaper offices trying to place an ad for a company called Alexander Keyes, a wine and spirit merchant, who want to place an ad for a two-month period and as part of the deal to get a favourable mention elsewhere in the paper. He discusses this with the newspaper foreman, J.P. Nannetti (1851-1915), an MP and future Lord Mayor of Dublin, and a man of Italian origin. Bloom muses about him; "Strange he never saw his real country. Ireland my country . . . More Irish than the Irish." In this sense, Nannetti is akin to Bloom with his Hungarian heritage, although, having been elected by the people of Dublin, Nannetti has clearly assimilated more successfully than Bloom, who, whatever he himself thinks, remains an outsider in the eyes of his fellow Dubliners. Bloom’s distinctly unheroic effort to place the ad and earn his commission comes to an unsuccessful end when Evening Telegraph Editor, Myles Crawford, dismisses Bloom’s request, telling him that Keyes can “kiss my royal Irish arse . . . Anytime he likes, tell him.”

Much of this episode is devoted to a discussion of a number of speeches, by Dan Dawson, by Seymour Bushe, the barrister in the Child's case which has already been referred to in the Hades episode, and most notably by the patriotic orator, John F. Taylor's speech. Dawson is ridiculed for his ludicrously over-the-top rhetoric.

"As 'twere in the peerless panorama of Ireland's portfolio, unmatched, despite wellpraised prototypes in other vaunted prize regions, for very beauty, of bosky grove and undulating plain and luscious pastureland of vernal green, steeped in the transcendent, translucent glow of our mysterious mild Irish twilight .."

John F. Taylor (1853-1902) is an altogether different class of speechmaker. Joyce quotes a notable speech Taylor delivered in October 1901, and which was published as a pamphlet two years later. In it, Taylor recalls the struggles of the ancient Jewish people in the face of the might of Imperial Egypt. He quotes an Egyptian high priest who derides the Jewish people: "You are a tribe of nomad herdsmen; we are a mighty people . . .You have but emerged from primitive conditions; we have a literature, a priesthood, an agelong history and a polity".

But Taylor turns the tables on those who would dismiss the Jewish and Irish struggles:

“. . . had the youthful Moses listened to and accepted that view of life . . . He would never have spoken with the Eternal amid lightnings on Sinai's mountaintop nor ever have come with the light of inspiration shining in his countenance and bearing in his arms the tables of the law, graven in the language of the outlaw."

Remarkably, W.B. Yeats was also familiar with Taylor's speech which he quotes from in his Autobiographies. Yeats viewed Taylor as “an obscure great orator.” Like Yeats, Taylor was part of the circle of the Fenian, John O’Leary. They did not see eye to eye, including on account of Taylor’s dislike of Yeats’s supernaturalism. For his part, Yeats acknowledged that he was no match for Taylor with the spoken word.

When Stephen arrives in the newspaper offices, he gets a decidedly warmer welcome than Bloom had received. Stephen had come to pass on a letter on foot and mouth disease he had been given by headmaster, Mr Deasy, in episode 2.  Editor Myles Crawford agrees to publish Deasy’s letter, but wants Stephen to write for the paper, “something with a bite in it.” Stephen, who has literary ambitions that go well beyond writing for the Evening Telegraph, was not going to be lured into a career in Dublin journalism, of which the Aeolus episode presents an unflattering picture. Joyce inserts a reference to Gabriel Conroy’s literary work for the Dublin Daily Express. Readers of Dubliners will remember Conroy as the main character in Joyce’s great short story, ‘The Dead’. I have always thought of Conroy as Joyce’s image of what he would have become had he remained in Ireland instead of moving to Trieste in 1904.

The episode ends with an exodus to a nearby pub. As they pass Nelson’s Pillar, Stephen tells a rambling, inconsequential story about two Dublin women buying meat and plums, and eating them at the top of the pillar while tossing the stones down to the pavement below. It is hard to know what to make of this story, which appears to have no point to it. Joyce seems to imply that this bastion of moderate Irish nationalism, the offices of the Freeman’s Journal, is plagued by the winds of empty rhetoric, endless conversation and ultimate inaction. 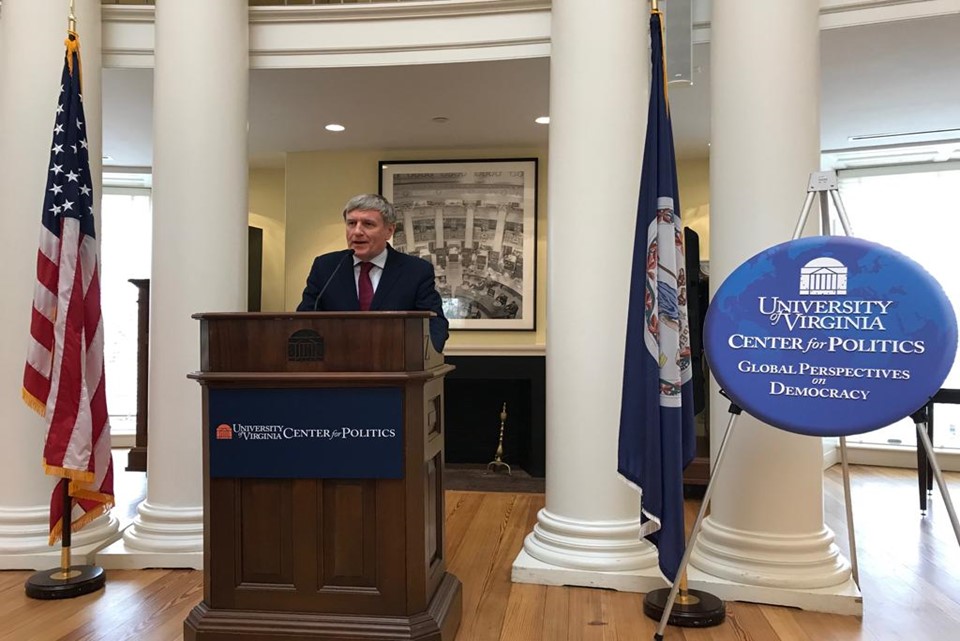 Podcast by Ambassador Daniel Mulhall with the departing EU Ambassador to the US, David O'Sullivan on the impact of EU membership on Ireland, the future of EU-US relations and Brexit

A podcast on Ulysses between Ambassador Daniel Mulhall and Washington lawyer and literary scholar, Joe Hassett

Press Release on St Brigid’s Day celebrations across the US 1st-12th February, 2019

Panel discussion & Podcast at Embassy of Ireland on Dáil100

On Wednesday 23 January 2019, Ambassador Daniel Mulhall hosted a panel discussion at the Embassy of Ireland to commemorate the centenary of the First Dáil.

The State of the Global Irish: Remarks at the Opening of the Irish Network USA Annual Conference

The State of the Global Irish: Remarks at the Opening of the Irish Network USA Annual Conference in New Orleans, 19 October 2018