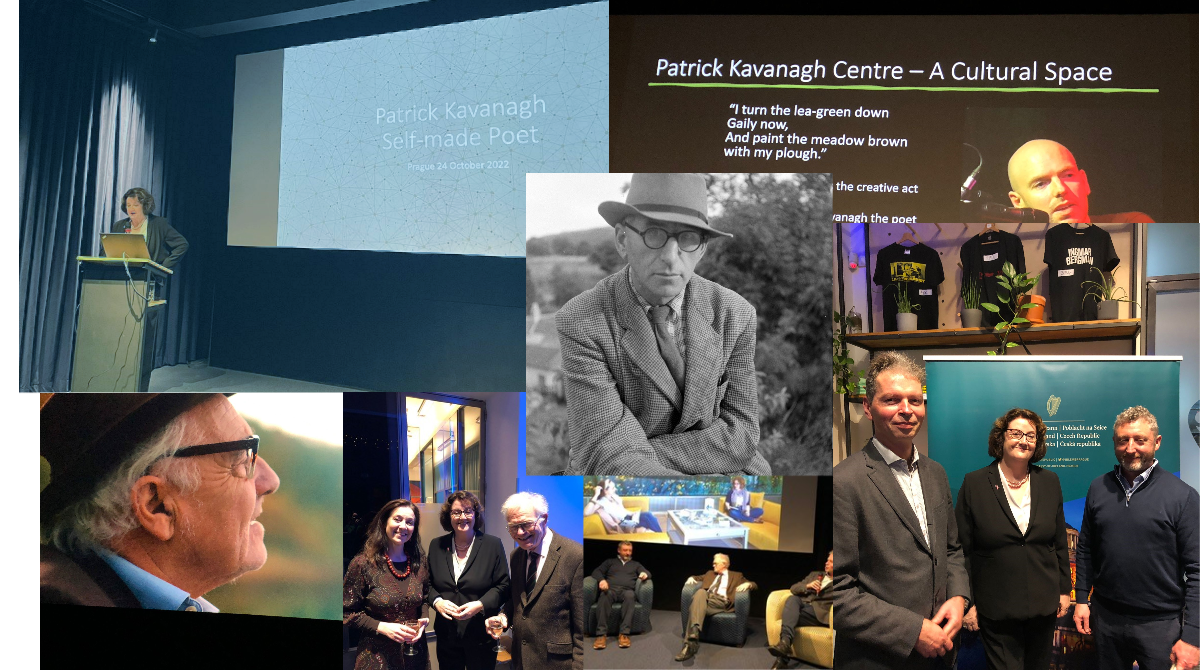 Round up of our autumn events at Embassy Prague during the Czech Presidency of the European Council July- December 2022! Don’t miss out -  follow us on Facebook to find out abou upcoming Irish events and activities.

Noc Literatury was definitely a highlight of the season for the Embassy. This year, the Embassy welcomed hundreds of visitors to an open evening at the Embassy which featured readings in Irish and Czech from Máirtin O’Cadhain’s “An Eochair” book. Dr. Radvan Markus’s brilliant translation from the Irish original was greatly enjoyed by the audience, and some were lucky enough to enjoy the readings in Irish as well as Czech. During the programme, sign language courses were held and selected readings were translated into sign language. Czech television featured a live broadcast from the Embassy during the prime time news!  Visitors had the chance to enjoy Seamus Heaney and Ireland in 10 Words exhibitions on display in the Embassy. Literature Night 2022 – Literature Night Literary Project (nocliteratury.cz)

We celebrated the annual Day of European Languages in Prague on September 30th and Irish was featured among the mini-courses as an official language of the European Union! European Day of Languages > Home (ecml.at)

The University of Hradec Králové presented its Book Fair 2022 with a special commemoration of James Joyce and the 100th anniversary of the publication Ulysses. Visitors could get acquainted with the work James Joyce thanks to Marie Gemrichová, a PhD student at the Centre for Irish Studies Charles University, who gave a special lecture on the work of Joyce. Visitors to the lecture also had the opportunity to see also our travelling exhibition “Ireland in 10 Words”.  Book Fair 2022 - University of Hradec Králové (uhk.cz)

On October 18, the Embassy welcomed Irish poet and Academic Bernard O'Donoghue FRSL to launch a selection of his poems in English with parallel Czech translation. For the ‘Rainmaker’ collection, translator Tereza Brdečková chose thirty-nine poems from O’ Donoghue’s last six collections. Bernard’s reading was the highlight of the evening.

The life and work of Patrick Kavanagh was presented at the Edison Film Hub, Prague, in October.  Professor Nicholas Grene (Trinity College Dublin) introduced the poet’s life and works to a Czech and Irish audience. Darren McCreesh, Manager of the Patrick Kavanagh Centre in Inniskeen, Co. Monaghan gave a presentation on the evolution of the Centre, current programming, and future plans for expansion and international engagement. The event featured extracts from the European Heritage in Motion award winning film ‘The Pincer Jaws of Heaven’. The discussion was moderated by Professor Ondřej Pilný Director of the Centre for Irish Studies at Charles University.

For Halloween, the Embassy invited our followers on Social Media to submit their spooky snaps, with a prize for the ghastliest!