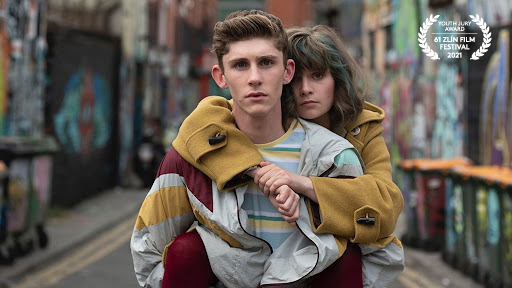 September was a busy month for Irish cinema in the Czech Republic.  At the 61st Zlin International Film Festival for Children and Youth Dating Amber (David Freyne) won the Main Prize of the Youth Jury for Best Feature Film in the Junior and Youth Category. The Youth Jury said “We felt different emotions and we experienced the story with the main characters. The characters have shown us that it is human to be afraid of what others will say about us. But standing up for our true selves will never hurt us as much as our own lie”

A celebration of contemporary European literature took place on the annual Night of Literature in Prague and across the country. Sally Rooney’s Normal People, translated to Czech by Radka Šmahelová was read aloud along the banks of the Vltava in Prague and in regional libraries across the country who chose Normal People for their readings with books donated by the Embassy of Ireland.

Irish contemporary artist Alannah Robins is presenting her work at the Regional Gallery in Liberec at an exhibition called Spiritualita in collaboration with (a Czech artist?) proudly supported by the Embassy and Culture Ireland.

Last but not least, there was a chance to practice your cúpla focal during Speak Dating, with Irish language lessons during the European Day of Languages organized by the European Commission Representation in Prague.