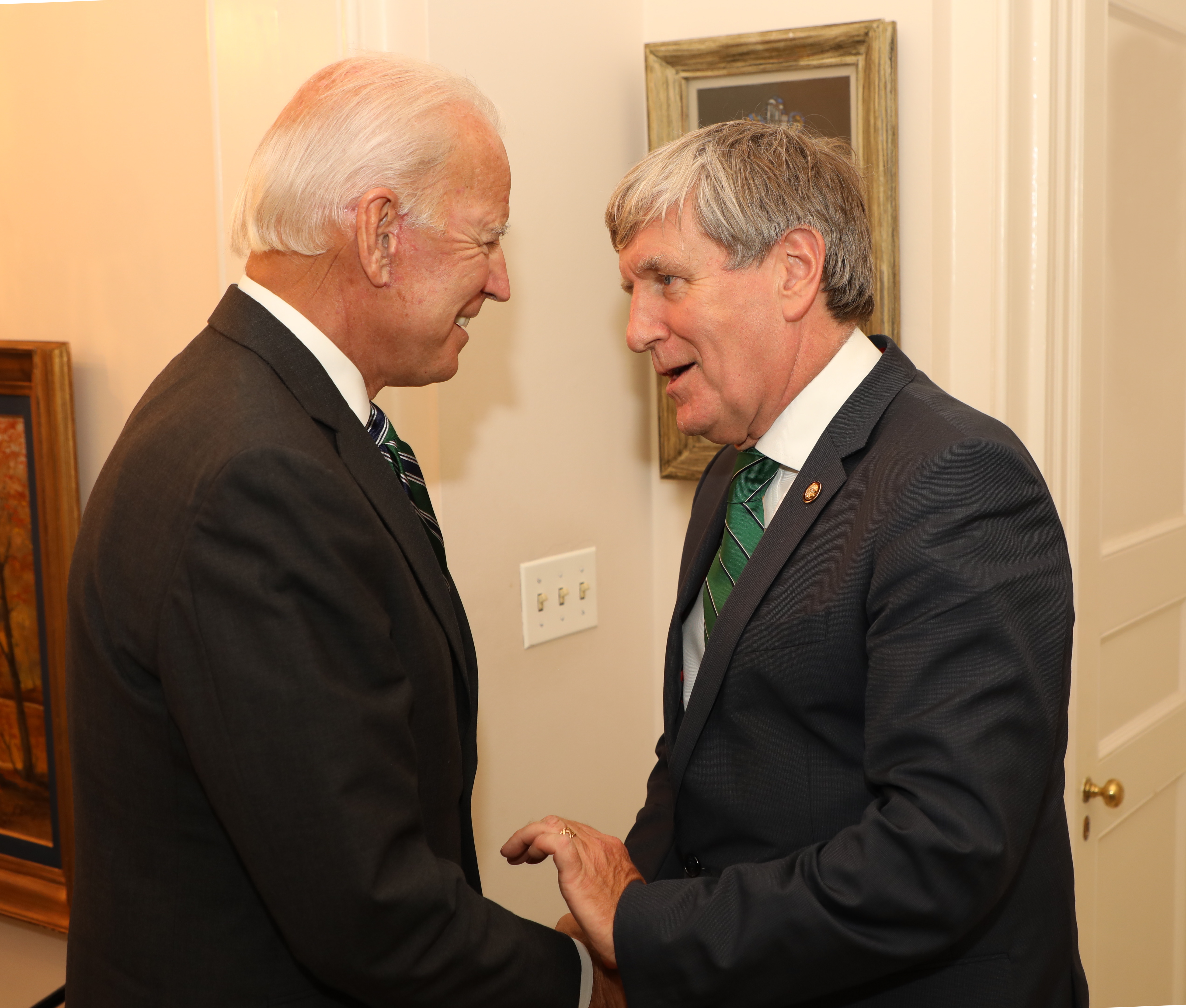 Greta and I were deeply honoured to be present for the inauguration of Joseph R. Biden as America’s 46th President (22 of his predecessors were of Irish descent), and of Kamala Harris as Vice President.

Having viewed so many Presidential Inaugurations from a distance, it would have been a privilege to attend any inauguration, but this one is of very special significance for an Irish Ambassador. That is because of President Biden’s pride in his Irish heritage. He has the strongest Irish family background of any President since John F. Kennedy. Moreover, throughout his decades in public life he has identified himself as an Irish American.

As I watched Chief Justice John Roberts swear in the new President, I could not help thinking about a number of my fellow countrymen and women - James and Mary Stanton, Patrick Blewitt, Catherine Scanlon, James Finnegan and Catherine Roche - all of whom crossed the Atlantic in the mid-19th century to become part of the family tree of an American President.

President Biden’s Irish roots are deep and wide. His back story is akin to those of some 33 million Americans many of whom are also descended from 19th century Irish immigrants. On his mother’s side, all eight of the new President’s great-great grandparents were born in Ireland during the 1820s and 1830s. This means that they experienced the Great Famine of the 1840s which decimated Ireland, producing a grim harvest of death, destitution and mass emigration. They became part of an that enormous outflow from Ireland. Some 4 million Irish emigrants departed for America in the second half of the 19th century and, remarkably given Ireland’s size, in the century between 1820 and 1920 one-sixth of all immigrants from Europe to America hailed from Ireland.

I see the story and the Blewitts and the Finnegans, brought to light by their great-great grandson’s extraordinary success, as emblematic of the larger saga of Irish immigrants in America. Most of those who made that perilous journey across the Atlantic have been lost from history, their lives largely invisible because they left behind little documentary evidence of their struggles and accomplishments. We know that the lives of immigrants were hard ones. President Biden’s Irish-born great-grandparents, Catherine Roche and James Finnegan, from County Louth, did not live long after their arrival in America and their son, Ambrose Finnegan, the President’s grandfather was orphaned at a young age. His story tells another part of the story of Irish America as that son of a shoemaker, became a successful figure in Scranton, an employee of the local paper during that great age of the newspaper industry. It is no coincidence that the arrival of millions of immigrants from Ireland and elsewhere came at a time when the American economy was scaling new heights in the half-century after the Civil War. They laboured to make America the success it became during that Gilded Age.

In meeting Irish Americans all over this country, I often hear about the importance of their grandparents in passing on an Irish heritage. President Biden seems to follow that pattern and the influence of his Finnegan grandparents from Scranton is apparent. He spoke movingly about this when he came to residence in 2018 to launch the Cambridge History of Ireland. His strong sense of an Irish heritage shone through everything he said on that occasion. He graciously stayed for quite a while after his formal remarks and interacted happily with our guests on that memorable evening.

When he visited Ireland in 2016 as Vice-President, he wrote about his enthusiasm for the country of his ancestors. As he put it, “I have always been and will always be the son of Kitty Finnegan. The grandson of Geraldine Finnegan from St. Paul’s Parish in Scranton; a proud descendant of the Finnegans of County Louth. The great-grandson of a man called Edward Francis Blewitt, whose roots stem from Ballina, a small town in Ireland’s County Mayo”.

During the 2020 election campaign, candidate Biden often referred with pride to his Irish Catholic upbringing. In September, at a key moment in the EU-UK negotiations, when the British Government’s commitment to the Protocol on Northern Ireland agreed in 2019, appeared to be wavering, he signaled his support for the Good Friday Agreement and for the retention of an open border in Ireland.

President Biden has never hidden his enthusiasm for Irish poetry. Reciting W.B. Yeats’s poetry helped him overcome a childhood stutter. In the latter part of the campaign, he released a video of his stellar reading of Seamus Heaney’s powerful poem, ‘from The Cure at Troy’ with its brilliant phrase about making “hope and history rhyme”.

I have been asked why Irish people take such pride of the achievements of people of Irish descent around the world. It is because, notwithstanding the fact that one in six people in today’s Ireland were born outside our State, in our bones we know that we area people shaped by emigration, which has been central to the experience of being Irish for the best part of two centuries. The departure of so many of our people was devastating for the country they left behind, but our exiles also became a source of support for Ireland as we strove to assert our independence and cultural identity. A potent transatlantic bond thus developed. It has survived the test of time as reflected in Irish American backing for Ireland during the negotiations concerning Britain’s departure from the European Union. It is because President Biden’s story is an integral part of a wider Irish story, that the inauguration of President Biden is a moment of great pride and celebration in today’s Ireland.

Celebrate Ulysses with the Embassy and DC Public Libraries