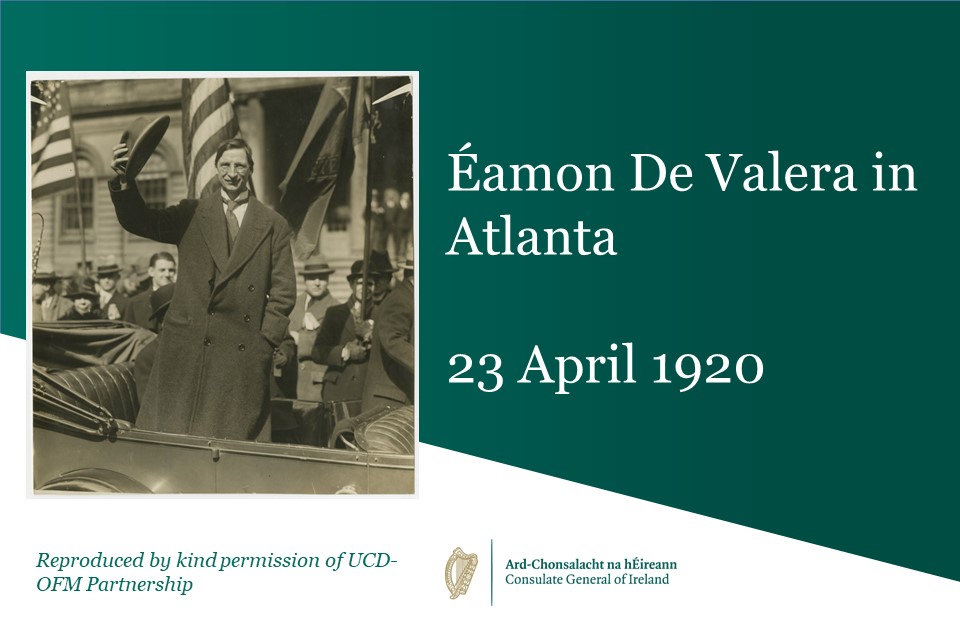 Éamon de Valera visited Atlanta on April 23rd 1920 as part of a tour of the American South aimed at seeking support for Irish independence. At the time, he was the President of Dáil Éireann and the first elected leader of the Irish people. Ireland’s War of Independence was getting underway at home.

De Valera was welcomed in grand style here, almost like a foreign head of state. The Atlanta Journal at times called him the “Irish President” or “president elect of the Irish Republic”. 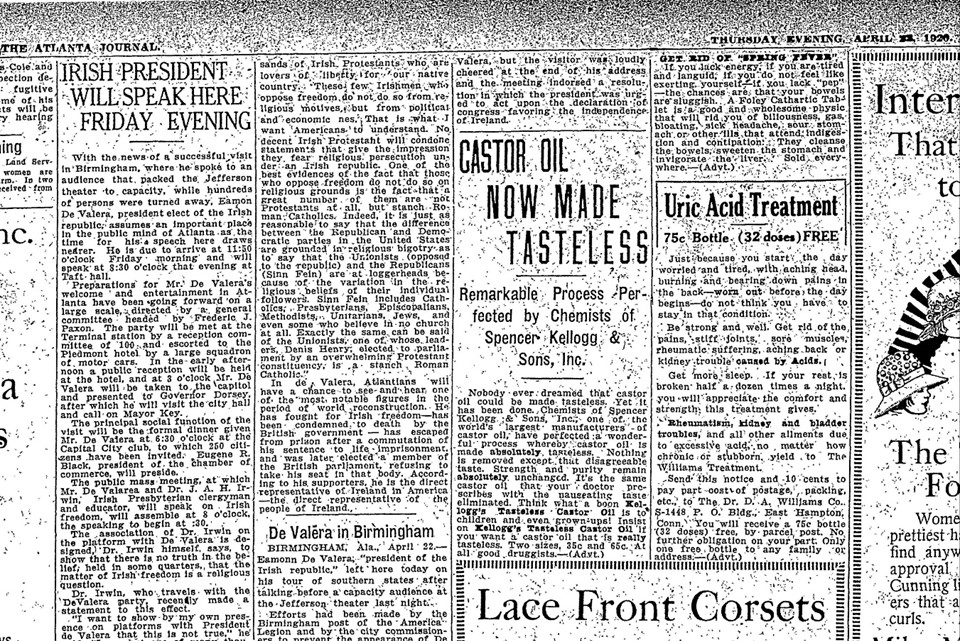 After a reception on his arrival at the Terminal train station, he called on the Governor of Georgia, Hugh Dorsey, and Mayor of Atlanta, James Key, and was hosted for dinner at the Capital City Club by the President of the Chamber of Commerce, Eugene Black. The day’s highlight was his address to a packed mass meeting at Taft Hall, now Georgia State University’s Dahlberg Hall, where he presented Ireland’s plea for national freedom. 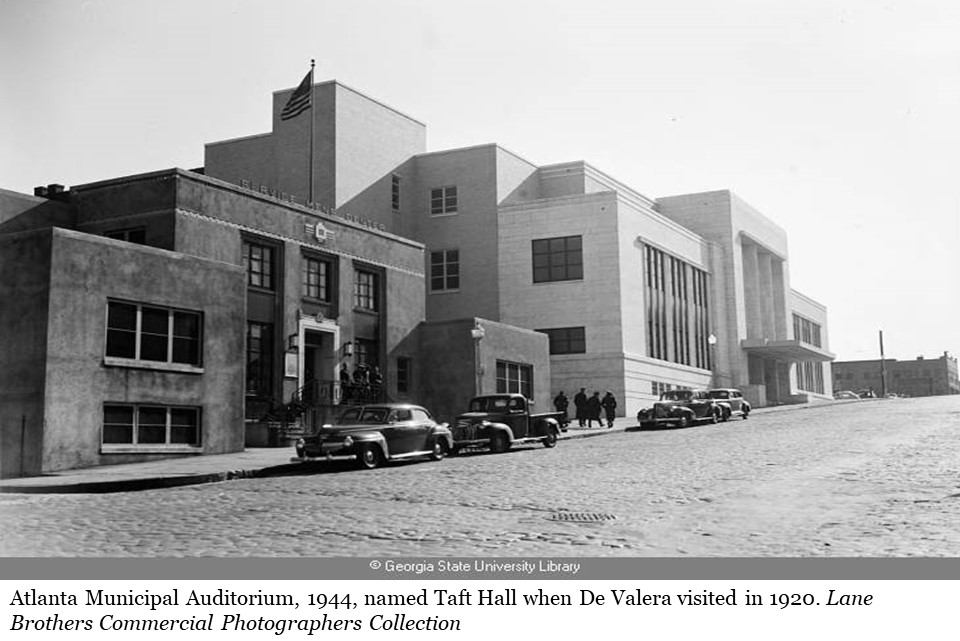 It was a little disappointing that the Governor and Mayor refused to officially recognise de Valera as a head of state, as the Mayor of Charleston did a few weeks before. However, the level of his reception was impressive in context. The Irish Free State was only established in 1922, and it was first recognised by the U.S. as a state with autonomous control over its own foreign policy in 1924.

In Atlanta and across the South, where Protestant Christianity predominated, De Valera and his allies took care to show that they were not mere Catholic separatists. A Presbyterian Minister from Ulster, Dr J.A.H. Irwin, joined the tour and spoke alongside de Valera at public events. The Atlanta Journal of April 23rd reported that de Valera’s reception committee wore “white, green and orange ribbon signifying the movement for the republic was perfectly non-religious”. 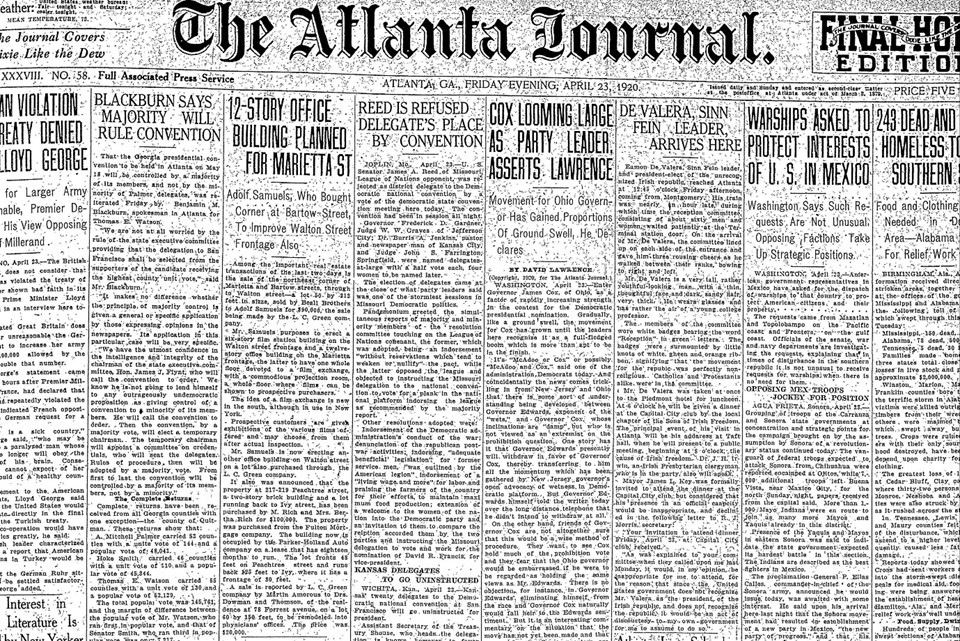 Despite de Valera’s pragmatic focus on appealing to establishment leaders in Atlanta, a more radical perspective on his republican agenda was hinted at in an Atlanta Journal report of April 22nd. De Valera’s advance man, Liam Mellows, is said to have called De Valera one of the “most notable figures in the period of world reconstruction”.

Elsewhere in this period, De Valera or his staff would make common cause with international socialists, Indian and Egyptian nationalists, Native American activists and Marcus Garvey’s black nationalist movement. In many places, De Valera’s operation also sought backing from Jewish leaders. For example, Rabbi George Solomon of Congregation Mickve Israel (whose mother was Irish) was among the key supporters of his visit to Savannah.

The striking success of De Valera’s programme in Atlanta was mainly due to the efforts of his skilled advance team, a local branch of The Friends of Irish Freedom and the eminent chair of his reception committee, Frederic J Paxon, a former chair of the Atlanta Chamber of Commerce. However, in line with the best Irish tradition, local Irish musicians also contributed patriotically. A company who had presented “The Lass from Limerick Town” the previous week at the Atlanta Theatre, sang at De Valera’s event in Taft Hall. A Mr William Maurer delivering the solo “Erin Dear My Heart’s for You”.

After the tribulations of Ireland’s War of Independence and Civil War, Eamon de Valera went on to become Ireland’s longest serving head of government and President.

A public event to mark the centenary of De Valera’s visit had been arranged at Dahlberg Hall by Georgia State University, Atlanta’s Irish Community and the Consulate General of Ireland for April 23rd 1920, with Dublin-based historian Dr Brian Hanley as the guest speaker. This is now being rescheduled.

A version of this article was published on AJC.com on 23 April 2020.