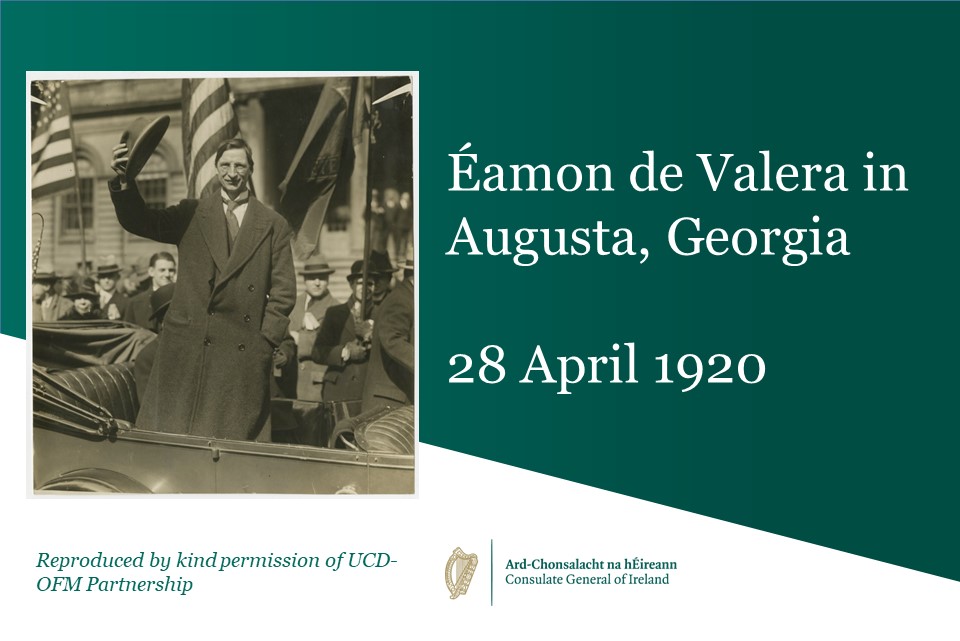 “EAMON DE VALERA HERE APRIL 28,” blared the headline. “EAMON DE VALERA SPEAKS IN AUGUSTA WEDNESDAY NIGHT.” “HIGH HONOR SHOWN BY AUGUSTA TO EAMON D. VALERA,” shouted the Chronicle’s front page on April 29. “DE VALERA GETS BEST ATTENTION” ran another article. According to the Chronicle,  De Valera received a welcome in Augusta never equaled except by visiting US Presidents and “generals of conquering armies.” But who was De Valera, and why was there so much excitement in our city a hundred years ago about his visit?‌‌ 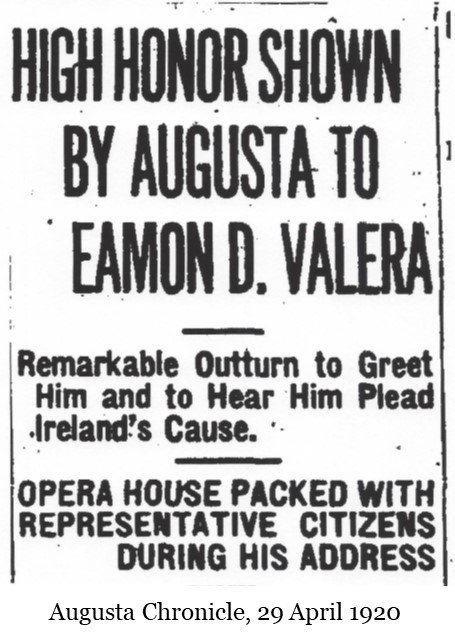 In the decades before, America had become home to an ever-growing trickle of Irish people. This had become a flood after the Great Hunger, the potato famine of the 1840s, during which a million people had starved to death. The Irish came here with nothing but the clothing they wore and a bitter hatred of the British, who had controlled Ireland for centuries, and who had failed save their starving Irish subjects. Many American Irish became strong supporters of Irish independence. They publicly agitated for justice for Ireland, while secret organizations raised money to support revolutionaries.

The moment of truth came in April 1916, when Easter Week saw a group of revolutionaries launch a rising in Dublin, which was financed by secret American Irish efforts. After a week of heavy fighting, the rebels, who included De Valera were defeated; sixteen of the leaders were executed. De Valera, known as “Dev” to his friends and supporters, barely escaped execution. The summary executions produced massive outrage and Ireland’s most radical pro-independence party, Sinn Féin, rapidly came to dominate the political landscape. Dev, by virtue of both his talents and the lucky accident of being the most senior leader to survive the uprising, became the leader of the newly created - although illegal - Irish Parliament. Soon, the Irish War of Independence against British control began.

Dev and his associates went underground, but they did not cease their efforts. They realized that their underground wartime government needed two things; money, and recognition by foreign governments. Dev decided to leave Ireland to come to the United States (where he had been born!) to raise money and see if he could lobby to the political establishment to support the Irish independence effort. It looked promising. The American Irish constituted an enormous and well organized group; the Irish could appeal to America’s own struggle for independence, long ago; and Woodrow Wilson had often spoken during World War I, which had just ended, of the rights of small nations.

Once De Valera was in the United States, he first worked with a huge outfit — the 200,000-member Friends of Irish Freedom — to organize a speaking trip designed to raise money for his cause. The Augusta chapter of the FOIF worked to organize his visit to Augusta on April 28, 1920. Dev arrived, and according to the Chronicle, his talk was “captivating.” The crowd’s enthusiasm was not dampened by the delay of the function, which did not start until 1030 at night because of an accident on the Georgia Railroad. Dev was preceded by a Presbyterian minister from Belfast as speaker, a clever choice by the FOIF — insulating it from the usual charge that Irish independence was solely a desire of the Catholic Irish. In a possibly unique event during his travels, Dev was greeted by a rebel yell from 10 Confederate veterans.

Dev held his audience spellbound, even though the paper said he was “not a great orator,” but rather because of his sincerity, his loyalty to his cause, and simplicity of his request; “justice only.” (I should add that Dev was anything but a simpleton; an Irish historian not long ago referred to his “serpentine political intellect.”)

The following morning De Valera met with many city dignitaries before taking the train to Charlotte for his next speaking engagement. Judging by the Augusta newspapers, the enthusiasm for his visit was universal. And this was more than a footnote to history. Dev’s career was only just beginning. Ireland gained its independence in 1922. A civil war followed. Dev was on the losing side. However, he re-entered politics, and was either prime minister or president of Ireland for 30 years - unquestionably the single most important figure in the history of independent Ireland. He was still alive when my oldest sister settled in Ireland!! 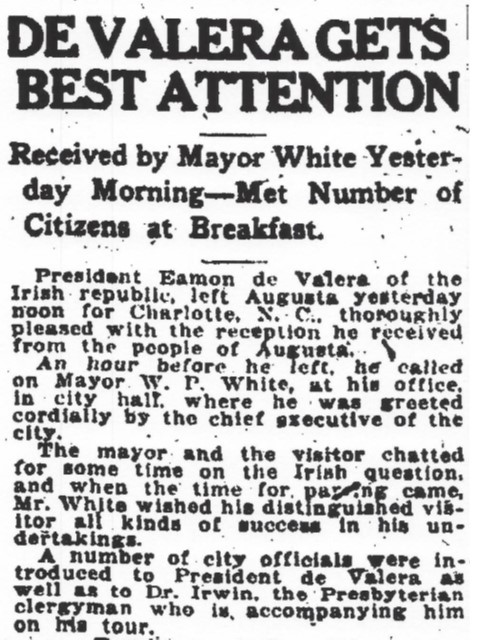 His year-long sojourn in America had mixed results. His money raising was tremendously successful, as $5 million of “bond certificates” were sold, half that money eventually making its way to Ireland. However, Dev got in a huge fight with the FOIF which led to a split in the American Irish community. His efforts to gain political support ultimately ran afoul of his own rigidity and inflexibility. However, without that personality, he would not have been so successful in the long run. And this was the man who a hundred years ago came to Augusta to plead the case of the Irish nation.

Hubert van Tuyll is a Professor of History at Augusta University. He is the author of seven books on the military and diplomatic history of the World Wars. His eldest sister has lived in Ireland since the 1960s and his is currently working on a book on Anglo-Celtic civil wars.