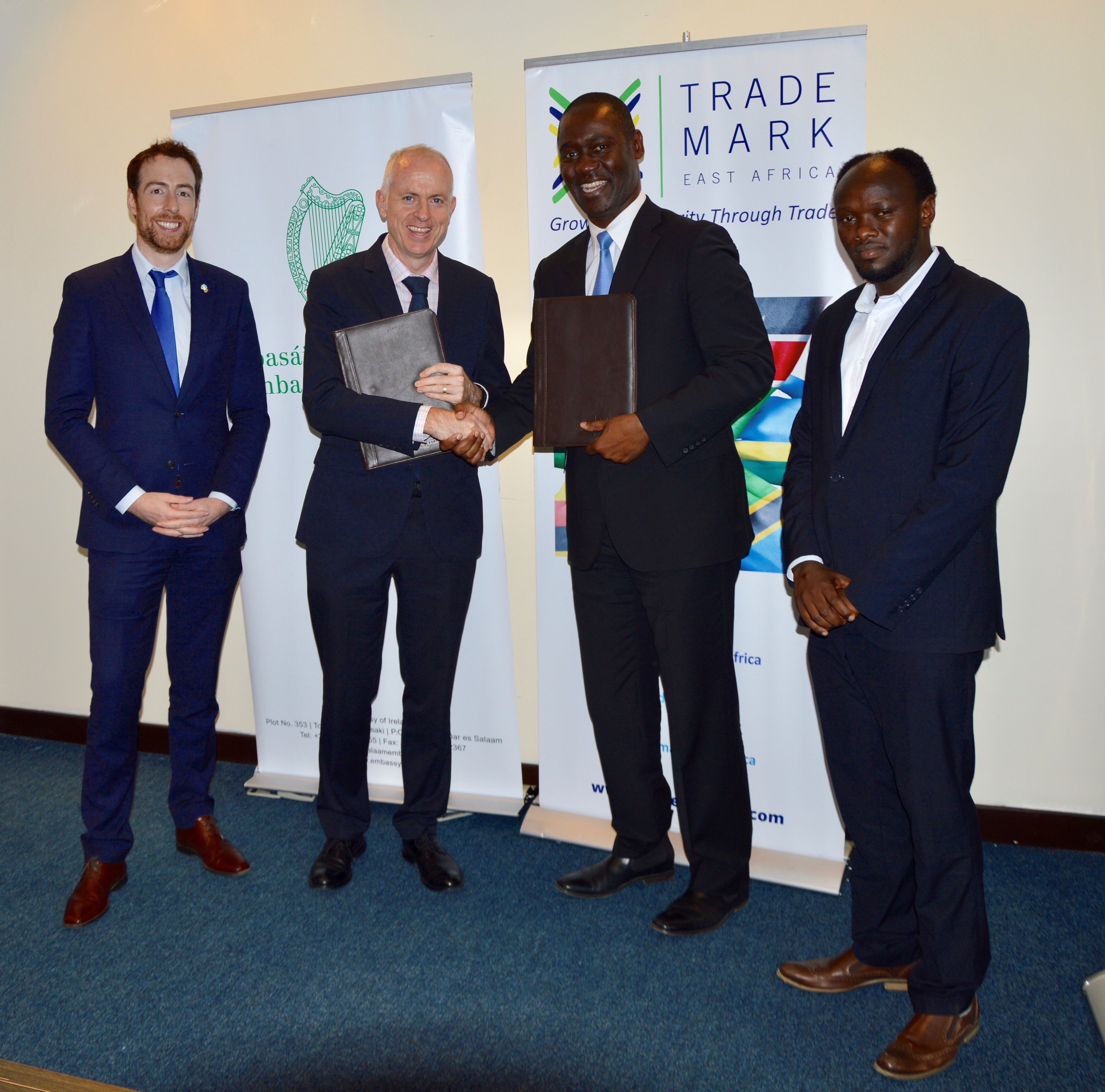 Ireland launched a new partnership worth €1 million (Tsh 2.6 billion) with Trademark East Africa to facilitate increased trade for Tanzania. Trademark East Africa’s work in Tanzania centres on strengthening the environment for trade and business, with a focus on increased physical access to markets; building an enhanced regulatory environment for trade; and promoting improved business competitiveness. This will be Ireland’s first grant to TMEA and it is expected that further support will be provided over the coming three years. The Embassy of Ireland’s grant to Trademark East Africa complements its investment, announced in September, of an additional €2.76 million (Tsh 7.32 trillion) to improve income opportunities within Tanzania’s agriculture sector.

“Over the past 50 years, Ireland has evolved from being a relatively closed economy to one of the most open economies in the world. This experience has transformed our country beyond recognition. As a small open economy, trade and investment have become fundamental to achieving sustainable growth in Ireland and quality jobs for all our citizens.”

Increased trade is a powerful means by which to stimulate economic growth and job creation in Tanzania and it will need to be a central priority if Tanzania is to achieve its target of becoming a middle-income country by 2025.”

Ambassador Sherlock also emphasised the importance of Trademark East Africa’s work over the coming six months in supporting the operationalisation of the Tanzania Mercantile Exchange and on its specific programming which supports increased inclusion of women in cross-border trade.

“I am very happy that this grant will support TMEA in its efforts to operationalisation the Tanzania Mercantile (Commodities) Exchange which will revolutionise trading of agriculture produce from Tanzania. This support will include installing trading information system, warehousing and market information dissemination systems.”

“Through all our work, the Embassy places a strong focus on gender equality to ensure that women are enabled to maximise their contribution to and benefit from improved economic growth. This is why, I am very pleased that Ireland’s grant enable Trademark to increase its Women and Trade Programme in collaboration with the Tanzania Women Chamber of Commerce. This programme builds the capacity of women traders in Tanzania, including supporting them to mobilise resources to establish industrial parks for women food processers, and be able to access markets outside Tanzania.”

In his remarks, Ambassador Sherlock also highlighted the Embassy’s broader work in support of Tanzania’s trade. This includes a capacity building programme Tanzania Port Authority through the UN’s Port Training Programme which promotes the sharing of knowledge and expertise between port operators in Dublin and Dar Es Salaam. Ambassador Sherlock also spoke about the Africa Agri-Food Development Fund designed to support sustainable growth of the agri-food industry in Africa, build markets for African exports and support mutual trade between Ireland and Africa. He expressed his hope that this Fund will be accessed by Tanzanian firms to establish business links with Ireland and increase trade and investment in this sector. Lastly, the Ambassador expressed his satisfaction that the Embassy was able to support some of Tanzania’s leading entrepreneurs to attend the Africa-Ireland Economic Forum which took place in Dublin last month. This annual event creates opportunities for business leaders from Ireland and those across Africa to meet and explore how trade and investment across Africa can be increased.