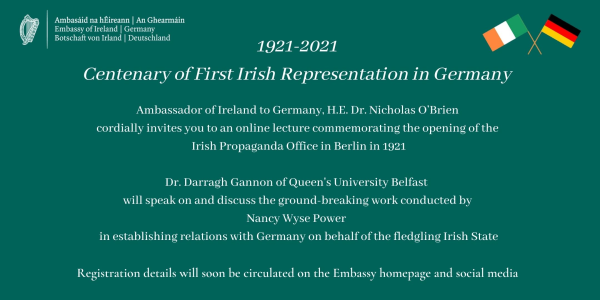 Dear friends of the Embassy Of Ireland in Germany

H.E. Ambassador Dr. Nicholas O'Brien
cordially invites you to our centenary event commemorating the opening of the first official
Irish representation in 1921 in Germany by
Nancy Wyse Power

We have the honour of welcoming
Dr. Darragh Gannon
of Queen's University of Belfast
as our invited guest speaker

This is an online event that will be delivered by Zoom

In 1921, the fledgling Irish State decided that it needed to amplify its voice in the great cities of the world and thus it began opening offices in various locations across the globe. One of the earliest such offices, known as an Irish Propaganda Office, was opened in Berlin in April 1921 by Nancy Wyse Power, thus making her the first official appointed in Germany by any government of Ireland.

Nancy Wyse Power’s pioneering work in opening this office and her publishing the “Irisches Bulletin” was instrumental in promoting Ireland and bringing it to the attention of both the German public and the officials of the Weimar Republic. Her work laid lasting foundations for subsequent Irish missions to Germany.

To mark the centenary of the opening of the first official Irish office in Germany, Ambassador Dr. Nicholas O’Brien has invited the renowned Queen’s University Belfast research fellow and scholar of Irish history from 1916 to 1923, Dr. Darragh Gannon to deliver a lecture on the life and work of Nancy Wyse Power during her time in Berlin. Dr. Gannon’s lecture will commemorate and explore this significant moment in Irish-German relations and it will be live-streamed at 15:00 hrs CEST on Thursday 22 April.

This online event will be delivered via Zoom with pre-registration essential.

Registration is only possible via Eventbrite which can be accessed by clicking here.

The Zoom app video link will only be sent to those who register for the event via the link above.

On 22 April 2021, the Embassy in Berlin had the honour of commemorating the opening of the first Irish representation in Germany one hundred years ago.Dr. Darragh Gannon (Queen’s University of Belfast) delivered his lecture entitled “Gallant Allies in Europe, a Century of Ireland – German relations” in which he reflected on Nancy Wyse Power’s work in a cosmopolitan Berlin marked by upheaval.

The Embassy had the honour of welcoming Tara Erraught, an internationally renowned opera singer and mezzo-soprano, as invited speaker for the Irish Friday Club on 1 April 2021. Ms. Erraught talked about her passion for singing, her formative years, and her life on and off the stage as an opera singer for the Bayerische Staatsoper.

The Embassy Of Ireland in Berlin and the Consulate General Of Ireland in Frankfurt is proud to present, as the first of its Cultúr Salon series, a lecture on John Millington Synge's works and his links with Germany.

The embassy has developed an interactive map of Irish Studies Centres currently operating in Germany.

Launch of the 2nd, Germany – Ireland, Joint Plan of Action for Enhanced Bilateral and EU Cooperation