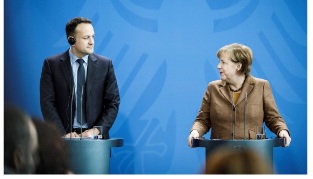 Issued by the Government Press Office

An Taoiseach, Leo Varadkar will travel to Paris on Tuesday, 2 April, to meet with French President, Emmanuel Macron. On Thursday, 4 April, the Taoiseach will welcome German Chancellor, Angela Merkel, to Dublin.

Both engagements are part of the Government’s ongoing engagement with EU partners, including strengthening relations and alliances with other Member States.

Discussion in both meetings will focus on current EU issues in particular latest developments on Brexit. Other matters to be discussed include the future of Europe agenda in advance of forthcoming summit in Sibiu and the appointment of a new European Commission, Council President and High Representative in June.

These two meetings reflect the deep and warm relations Ireland enjoys with both France and Germany, including the support shown to Ireland during the Brexit negotiations.

Speaking ahead of the meetings, the Taoiseach said:

“I look forward to travelling to Paris to meet President Macron, and to welcoming Chancellor Merkel to Dublin.

Both leaders have been strong and consistent allies of Ireland in responding to the unique challenges we face from Brexit. I will again express the Government’s gratitude for their continuing solidarity.  We will take stock of the latest developments on Brexit when we meet, efforts to secure ratification of the Withdrawal Agreement and No Deal planning

We will also take the opportunity to consider the Future of Europe agenda. Important discussions lie ahead, with an informal Summit on the Union’s strategic agenda due in early May in Sibiu, Romania, and negotiations on the EU budget for the period after 2020 due to be finalised by the end of this year.

While I meet regularly with both the President and Chancellor at the European Council in Brussels, these bilateral meetings are an important opportunity for an in-depth and one-to-one exchange on how to further strengthen our relations away from the bustle of the European Council.

Our bilateral relations with both Germany and France are better than ever - and will become even more important as we move to a European Union of 27 members.”

Following the success of Brigid Meets Berlin in 2019, 2020 and 2021, the Embassy of Ireland in Germany and the Consulate General of Ireland in Frankfurt am Main, in cooperation with Literature Ireland, present Brigidsfest, a new showcase of female literary talent whose books are yet to be published in the German language.

This free initiative helps returned emigrants who have lived abroad for at least a year and have returned to Ireland within the last three years, or will soon return home, to start and develop businesses in Ireland based on a business idea.

The Department of Foreign Affairs and the Embassy of Ireland in Germany are now inviting applications from Irish community organisations and cultural societies based in Germany for funding in the 2022/23 period.