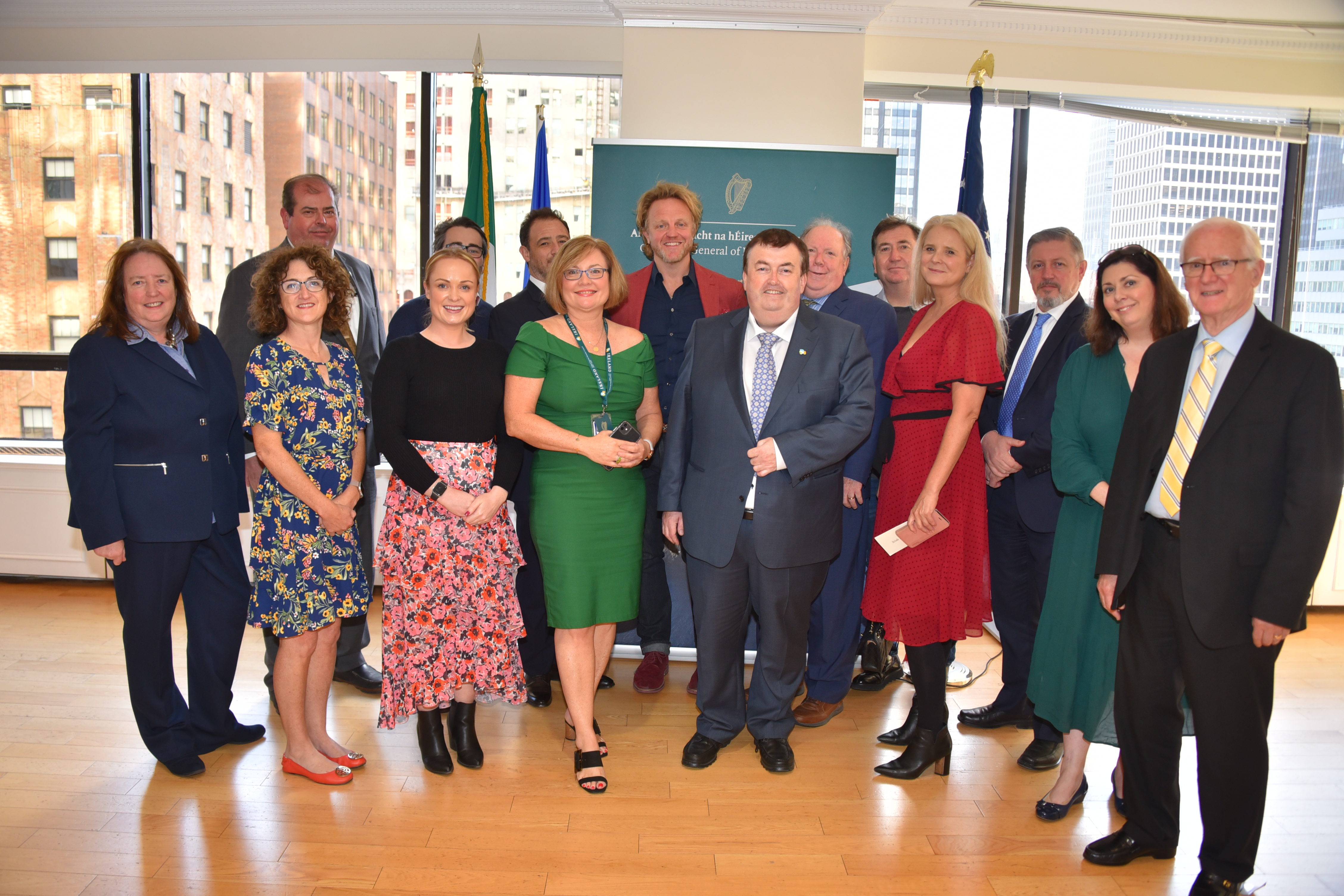 Minister of State for Overseas Development Aid and Diaspora Colm Brophy with representatives from the groups receiving grants from the Emigrant Support Programme at the Consulate General of Ireland in New York City. (NUALA PURCELL)

The Minister of State for Overseas Development Aid and Diaspora, Mr Colm Brophy T.D., announced details of more than $1 million in new funding for the Irish community in New York, the greater Tri-State Area and Pennsylvania during a visit to New York on Wednesday 20th October.

The Minister met representatives from the organisations to thank them for the vital work they have done to support the Irish in America - especially the most vulnerable - over the difficult period of the Covid pandemic.

The funding package will assist 24 organisations across the region and comes from the Government’s Emigrant Support Programme (ESP), run by the Department of Foreign Affairs.

·         Funding will also go to culture and heritage projects, including those aimed specifically aimed at supporting the Irish language, music, the arts, highlighting the role of Irish women, diversity and encouraging intergenerational engagement among our diaspora.

·         The Programme also supports business networks, which help Irish business people and professionals to connect with each other, and with others wishing to expand trade and investment to and from Ireland.

At the Consulate General of Ireland in New York, Minister Brophy said:

“I am delighted to be in New York to announce the Irish Government’s contribution from the Emigrant Support Programme to 24 Irish community organisations in New York, Connecticut and Pennsylvania and to acknowledge the remarkable work of our Diaspora over the past 18 months.”

“While the greatest threat from the pandemic has passed, the year ahead will be challenging for all of our partner organisations as they rebuild their services and programme of activities.”

“My visit is a demonstration of the Irish Government’s continued commitment to support their efforts over the period ahead.”

On travel the Minister said:

“I was delighted to hear the announcement that the restrictions on travel to the US will be lifted for fully vaccinated travellers from 8 November. This has been a very difficult and painful time for Irish people, both in Ireland and the US, who have been separated from loved ones for so long. I know that this great news will have brought great comfort and hope to many.

This is something we, along with our EU colleagues, have been advocating for a considerable time.

Ease of travel is vital for protecting our strong connections across the Atlantic, be that in business, academia or family connections.

Travel and tourism also go hand in hand, and my colleague Minister Catherine Martin was here last month for the launch of Tourism Ireland’s promotional campaign. Our message is that Ireland is open for business and we are looking forward to welcoming Americans back to Ireland.”

Note for Editors on the Emigrant Support Programme

Global Ireland: Ireland Diaspora Strategy 2020-2025 sets out what the Government will do over the next five years to support and engage with our diaspora communities around the world. The Emigrant Support Programme remains central to this commitment.

Since 1984, the Irish Government has given financial support to voluntary agencies providing advice and welfare services to Irish emigrants overseas. The Department of Foreign Affairs working through Ireland’s embassy network coordinates the provision of support to communities abroad and administers the programme.

The main focus for funding under the Emigrant Support Programme remains frontline welfare service providers that support elderly Irish emigrants, and other vulnerable members of our communities worldwide. In more recent years the programme has also recognised the importance of strong and active Irish communities, funding projects which foster a sense of community, promoting vibrant networks and a sense of Irishness among the Irish abroad.

In 2021, the budget for the Emigrant Support Programme is €13,095,000. The Emigrant Support Programme funding year runs from 1 July – 30 June. Particular priorities for this year included an emphasis on supporting organisations rebuilding their services post pandemic, as well as seeking to reach out to under-represented groups amongst our diaspora. Further details can be found on www.dfa.ie

Please see a list of organisations awarded funding in the 2021-2022 Grant Round :